DUP leader Arlene Foster has warned Boris Johnson that her party will continue to say no to his Brexit deal unless he secures further concessions from Brussels.

Addressing her party conference in Belfast, Ms Foster demanded "honesty" from the British government after reflecting on Mr Johnson's speech to the same event last year, when he insisted he would not erect any new economic barriers in the Irish Sea.

Ms Foster joked that the DUP had now put the British Prime Minister on the "naughty step" by voting against his government twice in the last week.

Denouncing the regulatory and customs borders between Northern Ireland and the rest of the UK contained in the prime minister's deal, the DUP leader claimed it would take Northern Ireland in the "wrong direction".

Ms Foster told delegates her party had the "boldness and strength to stand up and say no when we need to".

"On Brexit, we will not give support to the government when we believe they are fundamentally wrong and acting in a way that is detrimental to Northern Ireland and taking us in the wrong direction," she said.

"We will oppose them and we will use our votes to defeat them.

"Let me say clearly from this platform today that we want to support a deal that works for the whole of the United Kingdom and which does not leave Northern Ireland behind.

"But without change, we will not vote for the prime minister's agreement.

"It would be bad for Northern Ireland economically and will weaken the foundations of this great United Kingdom.

"We have been clear and honest with the government throughout this process and we expect the same in return. The customs and consent arrangements must be revisited and a one-nation approach adopted.

"We worked intensively with the government over recent weeks to try to reach a fair and balanced deal. We were not seeking a perfect deal.

"No such deal exists. We were seeking a deal which delivered Brexit without erecting barriers to trade.

"Dublin and Brussels belatedly reopened Mrs (Theresa) May's deal having rigidly refused to do so. Having told us it could not be re-negotiated it was, and I encourage the Prime Minister to do the same again."

The DUP leader also made clear her party could not live with the proposals for Stormont to give consent for extending the post-Brexit arrangements by way of a straight majority vote, rather than with the backing of a majority of unionists and a majority of nationalists.

"The one-sided approval mechanism for the Assembly takes no account of power-sharing," she said.

"Indeed, it would lead to Sinn Féin, the SDLP and the Alliance Party ganging up to render unionist votes irrelevant. If you believe in the principles of power-sharing then those principles must be enshrined in any deal."

This time last year, Mr Johnson, then the hot favourite to succeed Theresa May as prime minister, was a guest speaker at the conference, with then chancellor Philip Hammond also attending.

A year on, the DUP-Conservative party relationship is in a different place.

Twice in the past week the DUP's ten MPs voted against Mr Johnson during Brexit votes in Westminster.

The DUP stance meant the prime minister lost each time. 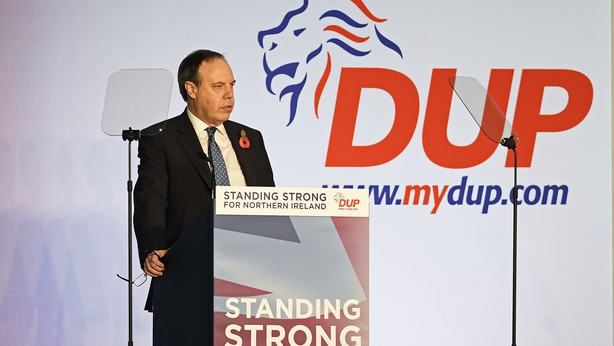 Addressing the party conference, Mr Dodds referenced Mr Johnson's speech at the same event last year, when he pledged not to erect economic barriers in the Irish Sea.

"This party has always made clear that we want a deal.

"A deal that works for the whole of the United Kingdom and for the European Union. A deal that recognises Northern Ireland's unique history and geography.

"A deal that supports our business community and families across this province.

"But, this party will only support a deal that ensures Northern Ireland leaves the European Union in a way that protects both the economic and constitutional integrity of our United Kingdom."

Mr Dodds said the current deal provided the "worst of both worlds".