The first meeting of the newly formed Beef Market Taskforce has been adjourned until further notice.

The adjournment came after angry scenes at the entrance to the Department of Agriculture offices, where farmers had been protesting since early this morning.

A delegation from the Meat Industry Ireland group who were arriving for the meeting were prevented from entering the building by the protesters.

In a statement, Meat Industry Ireland said the members of its delegation were "physically and aggressively prevented from doing so by protesters".

The Beef Plan Movement, which represents beef farmers, said the Meat Industry Ireland delegation should not have been blocked from entering the building.

Dermot O'Brien, a spokesperson for the movement, said that all parties need to be around the table in order to resolve issues in the beef sector.

The Department of Agriculture said in a statement that the taskforce was suspended following "altercations outside Agriculture House" that prevented members from attending the meeting.

He said: "It is in the interests of everyone involved in the beef industry that the work of the taskforce goes ahead.

"The taskforce’s remit is to monitor the implementation of the actions arising from the agreement reached on 15 September and offers the most viable platform for strategic engagement with key stakeholders.

"It was a great pity that farm representatives were not in a position to air the legitimate concerns of farmers at the taskforce."

He said: "ICSA decided at an early stage this morning that we could not attend the taskforce while injunctions remain in place.

"ICSA does not condone physical clashes but the blame for the failure of today's talks stands squarely with those meat processors who have so far refused to issue letters of discontinuance in respect of certain individual farmers.

"There is no way these talks will commence until all legal threats have been removed."

The taskforce was one of the main outcomes of an agreement reached last month, after dozens of meat plants were blockaded by protesting farmers. 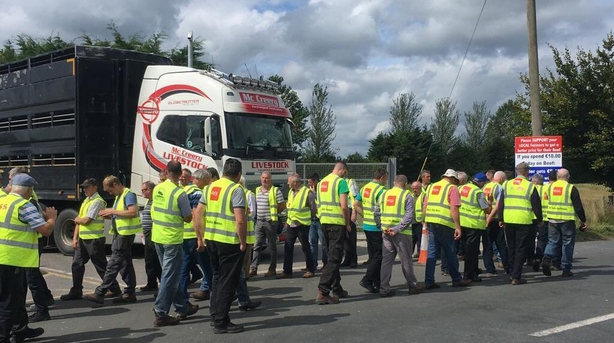 The recent agreement led to the introduction of new bonus payments for quality assured cattle. Some existing bonuses were also increased.

These payments are now being made to farmers, but disquiet continues about how factories are dealing with pricing.

While the Beef Market Taskforce has a wide remit, many hope it can provide scope for scrutiny and reform.

But the big sticking point is a claim that three named individuals are still subject to legal injunctions by meat plants. Lifting blockades and legal actions were two of the central planks of the recent agreement.

MII has told RTÉ News that the commitment to withdraw legal proceedings has been honoured by the beef companies concerned.

RTÉ News understands there will be an insistence that all legal action, from whatever source, against farmers be withdrawn before the taskforce can proceed.

Irish Farmers' Association President Joe Healy said that the first thing the taskforce will have to do is to address outstanding injunctions against farmers.

The IFA represented dozens of farmers in court and most have had injunctions lifted, but some remain. The organisation said this will have to be resolved immediately.

The IFA also said that deadlines set out in the beef sector agreement that have already been missed will also have to be resolved.

"The beef sector agreement specifically states that the Beef Price Index would be introduced from September 16th. It's now four weeks later and farmers are still waiting," Mr Healy said.

"This is to be a key tool ensuring more transparency on meat and offal markets, giving accurate verified information on price trends to keep the factories honest on the base price. We need it immediately."

President of the Irish Creamery Milk Suppliers Association Pat McCormack said that the taskforce must ensure, as its first act, that all parties to the agreement have implemented their commitments to date.

He said that all sides need to develop a plan that will ensure that beef prices return to what he called "a reasonable level for farmers".