An Post has unveiled a two-stamp set celebrating Irish rugby ahead of the start of the Rugby World Cup in Japan later this month.

Johnny Sexton is the 2018 World Player of the Year.

Chief Executive of An Post, David McRedmond, said that given the position of sport and of rugby in the fabric or Irish life it was fitting that two of Irish sports most iconic figures be the central images of the postage stamps.

Speaking at today’s launch, Joe Schmidt said: "When I first arrived in Ireland in the early 1990s to work as a school teacher and play with Mullingar RFC, I never imagined the impact Ireland would have on my life and that of my family.

"I have been lucky to work with so many talented people and have experienced some incredible days with both Leinster and the Ireland squad.

"Since coming to Ireland we have been treated with kindness and generosity by so many people and today is a great honour for me and my family."

Johnny Sexton said that while "it is a great honour" for him and his family "to feature on a national stamp", it is also about the rugby squad as a group.

"It is the hard work and dedication of this Ireland squad that has achieved so much together over the past few years that sees Irish Rugby’s success recognised by An Post," he said. 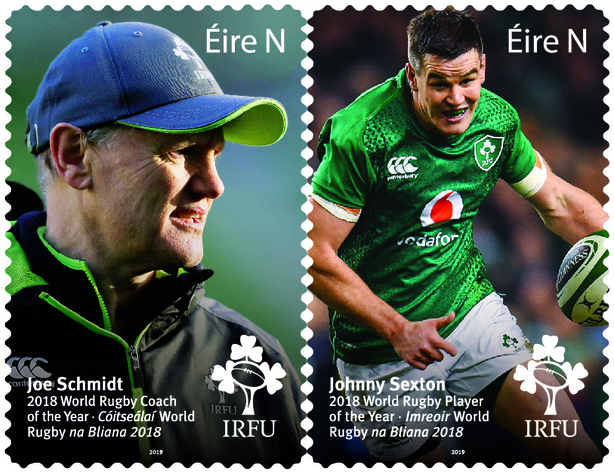