Police in Northern Ireland are investigating footage which appears to show shots being fired during a funeral for a former IRA member.

Alex Murphy received a life sentence for the IRA killing of two British soldiers in Belfast in 1988.

His coffin, draped with a Tricolour, was flanked from Murphy's Falls Road home by men wearing black berets and sunglasses, and paused at the republican garden of remembrance.

Yesterday evening, a video was posted on social media showing a masked man firing shots into the air over an open coffin.

PSNI Superintendent Lorraine Dobson said a "robust investigation" is under way to "establish the full circumstances surrounding this incident".

"Bringing any weapons onto the streets, whether imitation or real, is a reckless act and one that serves no other purpose than to cause fear and intimidation and puts lives at risk," she said.

"This was a criminal act with no regard for the wider wishes of law-abiding people, carried out by those who would seek to exploit and control the community through the fear of violence.

"The footage shows a man walking out of the front door of a house just yards away from where the shots were fired, while it also shows a young boy standing beside the coffin as the volley of shots was fired.

"Firing a gun, in such criminal circumstances, will always have the potential to put lives at risk and is simply unacceptable.

Superintendent Dobson said police were present during the funeral, adding: "An evidence-gathering operation was in place and any evidence of offences detected will be put before the Public Prosecution Service."

Murphy was one of two men who received life sentences over the IRA killing in March 1988 of corporals David Howes, 23, and Derek Woods, 24. 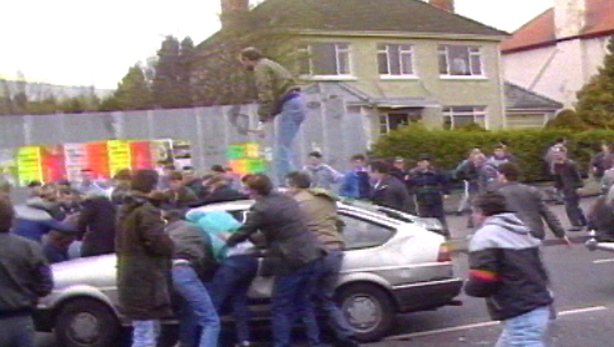 The two soldiers were dragged from their cars, stripped and beaten before being shot dead after they had driven into the path of a funeral for one of three people killed days before by Loyalist Michael Stone.