German Chancellor Angela Merkel has said she will do everything she can to prevent a no-deal Brexit, while Taoiseach Leo Varadkar said the EU must approach the border issue as a shared challenge.

Speaking after Brexit talks with the Taoiseach at Farmleigh House in Dublin, the chancellor said the European Union member states will stand together "until the very last hour".

Ms Merkel said: "Every step of the way we will stand together, we will walk together.

"We do hope that the intensive discussions that are ongoing in London will lead to a situation by next Wednesday, when we have a special council meeting, where Prime Minister Theresa May will have something to table to us on the basis of which we can continue to talk.

"We want to stand together as 27. Until the very last hour - I can say this from the German side - we will do everything in order to prevent a no-deal Brexit; Britain crashing out of the European Union.

"But we have to do this together with Britain and with their position that they will present to us.

"We will simply have to be able to do this. We have to be successful and we hope for a solution that we can agree together with Britain.

"I heard that you have the same saying as what we say in Germany: 'Where there's a will there's a way'.

"We are working on this and we have very good partners in the Commission, with Michel Barnier and Jean-Claude Juncker who are putting everything into finding a good ending, finding mutual solutions, so we will find this together.

"We still hope, obviously, for an orderly Brexit."

Mr Varadkar said that any further extension to Article 50 must have a credible and realistic way forward. 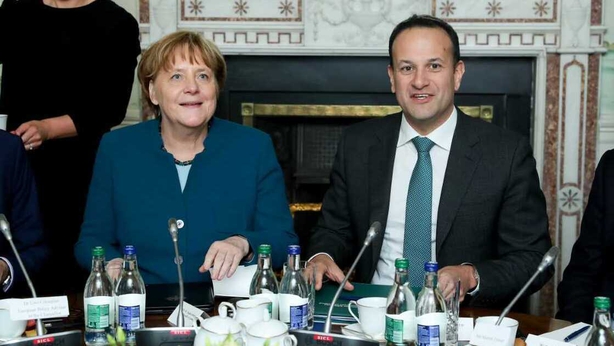 "Matters continue to play out in London and I think we need to be patient and understanding of the predicament that they are in," he added.

The Taoiseach restated that the EU was "prepared to amend the Political Declaration" if the UK's red lines shifted.

"Both Ireland and Germany want to have a future relationship with the UK which is close and comprehensive and as deep as possible, and we would like to see the Withdrawal Agreement ratified so that we can begin the negotiations on a new economic and security partnership without further delay," he said.

However he added: "There is very little time left and we have to prepare ourselves for all outcomes."

Earlier, the two leaders took part in a round-table discussion with 15 people from Northern Ireland and the border area about the impact a no-deal scenario could have on their lives.

They heard from some victims of violence, as well as farmers and business people.

It comes as efforts intensify to find a way through the Brexit impasse.

The UK Government and the Labour Party's negotiating teams are locked in intensive talks in the hope of agreeing a position that could win a majority in the House of Commons in the coming days to allow Theresa May to request a short delay to Article 50.

Discussing his meeting with Mr Macron, Mr Varadkar said he was "really heartened by the enormous support" that France continued to demonstrate towards Ireland, and by Mr Macron's statement that Ireland would never be abandoned by France or by the EU.

"Whatever issues arise, if there is no deal, they are very much seen as shared problems, ones that Ireland will try to resolve with our partners in France and the European Commission," he added.

"It's not a question of a big stick or us being put under undue pressure, but there are reasonable questions being asked as to how we will protect the integrity of the single market and the single union."

German MEP David McAllister said Germany and the EU have shown solidarity with Ireland and will continue to do so.

Speaking on RTÉ's Today with Sean O'Rourke, he said Germany was in favour of passing a withdrawal deal and allowing an orderly Brexit to take place, however, the ball was in the British court and any extension beyond 22 May was "problematic".

Mr McAllister said he personally felt that Brexit was a tragedy with severe consequences for the UK, but now we must just wait and see what happens.

The German Ambassador to Ireland has said there is a strong awareness in Germany of the impact of Brexit on the island of Ireland.

Speaking on RTÉ's News at One, Dieke Potzel said Ms Merkel wants to get a "clear picture of the current situation here" and to talk about the situation in the border region.

Ms Potzel said Germany wants to do everything and fight to the last moment to get a deal done.