The husband of the late coastguard volunteer Caitríona Lucas has said it is a great honour that one of her paintings has been featured in two new stamps issued to honour the Irish CoastGuard.

The stamps are based on an original painting by Ms Lucas who tragically lost her life on a rescue mission off Kilkee, Co Clare in 2016.

They were launched at the GPO in Dublin earlier today.

Speaking on RTÉ's News at One, her husband Bernard Lucas said the stamps are based on a painting she had completed featuring a helicopter and rescue boat.

"They have great significance. She painted things she loved. 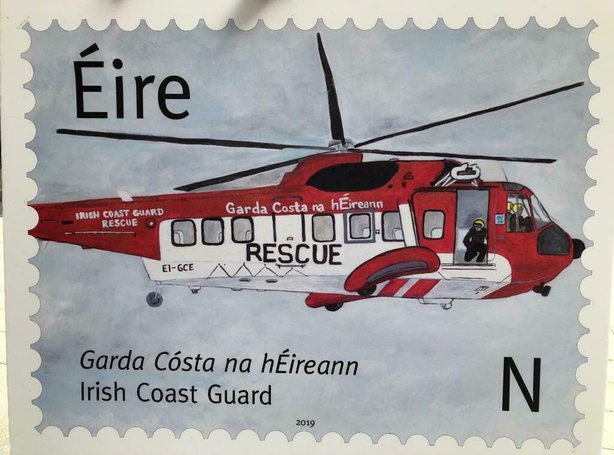 "It's to think of the Coast Guard in general - the people who we have unfortunately lost over the last two and a half years.

"It's to think of all the volunteers who are still going out everyday volunteering and helping people out in trouble."

Ms Lucas, a 41-year-old mother of two living in Liscannor in Co Clare, was searching for a missing man with two other volunteers when their rigid inflatable boat overturned near cliffs at Kilkee on 12 September 2016.

A rescue operation was launched to assist them, but Ms Lucas died shortly after she was airlifted from the water by the Shannon rescue helicopter.

"I'm always proud of Caitríona. She was a bright light that shone brilliantly," Mr Lucas added.