Four former secretaries of state for Northern Ireland have said consideration should be given to prioritising compensation for victims of the Troubles, over the criminal investigation into the perpetrators of the violence.

The group, including Tom King and Peter Hain, said their suggestion was based on the belief that any new historical investigation had little likelihood of success.

A recent British government paper of how to address the legacy of the past in the North, included a proposal for a new Historical Investigations Unit, which would examine hundreds of deaths during the Troubles.

In their response, eight senior members of the British House of Lords, including former Stormont secretaries of state Tom King, Peter Hain, Paul Murphy and John Reid, said they understood why many victims attach great importance to the prosecution and conviction of those responsible and said their views deserved the utmost respect.

In a letter to the current Northern Secretary, Karen Bradley, the group said their view was that the priority was to resource victims and not investigations, which they believed have little or no likelihood of success due to the passage of time and other factors.

The group also includes Chris Patten, who chaired the commission which established the PSNI, and the former Church of Ireland Primate, Robin Eames

They said prioritising victims should be considered as the best possible use of the £150m the British government is offering.

The letter says only a small number of investigations into the past yield prosecutions, and claims that of the 1,615 cases the Historical Enquiries Team (HET) investigated, just three resulted in prosecutions.

"We understand why many victims and others attach great importance to the prosecution, conviction and sentencing of those responsible for the appalling loss they have suffered," they write.

"But experience suggests that it would be a mistake to expect judicial outcome in any but a tiny percentage of the crimes that have not already been dealt with."

Peter Hain said that while they were proposing a line be drawn under the past, they were not proposing an amnesty.

He added they would not oppose the pursuit of a case if significant new evidence emerged. 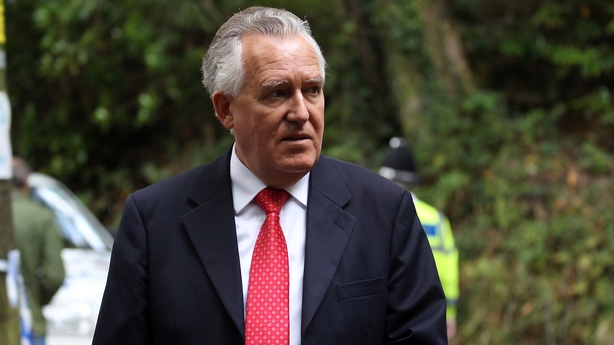 Instead, Mr Hain emphasised they wanted victim support to be resourced, not "costly investigations that on past evidence would not deliver justice for victims".

The past has been one of the sticking points between the Democratic Unionists and Sinn Féin through several rounds of failed talks to agree the return of power-sharing at Stormont.

The pursuit of former soldiers has also sparked outrage among the veterans community, particularly following the arrest of pensioner Dennis Hutchings.

The 77-year-old from Cornwall is set to face trial for attempted murder over the fatal shooting of John Pat Cunningham, 27, in Co Tyrone in 1974.

Peter Hain's letter on behalf of the group, said past cases must be treated in an "absolutely even-handed manner".