The Garda Commissioner has responded to criticism of the use of fire-retardant hoods by gardaí while policing an eviction in Dublin earlier this week.

Drew Harris defended the actions of the gardaí, but acknowledged they should not have been wearing the hoods without also using protective helmets.

Commissioner Harris said he has also requested a report from the Assistant Commissioner in charge of Dublin to see what lessons can be learned.

In a statement this afternoon, the Commissioner said that the officers showed restraint in the face of physical and verbal abuse from a small minority and condemned what he described as the racist abuse suffered by one garda working at the event.

He also said that officers in the public order unit in fire-retardant hoods were not wearing the correct form of dress for the incident, and that if it was deemed necessary to wear the hood, the officers should have also used protective helmets.

"The use of a fire retardant hood by public order officers is a matter for the operational commander on the ground and is designed to protect the safety of our members based on a risk assessment," Commissioner Harris said.

"However, the form of dress used at the event was not correct as it is policy that if it is deemed necessary to use the hood then it should be used in tandem with a protective helmet."

He said a directive has been issued today to re-enforce this requirement to all personnel. 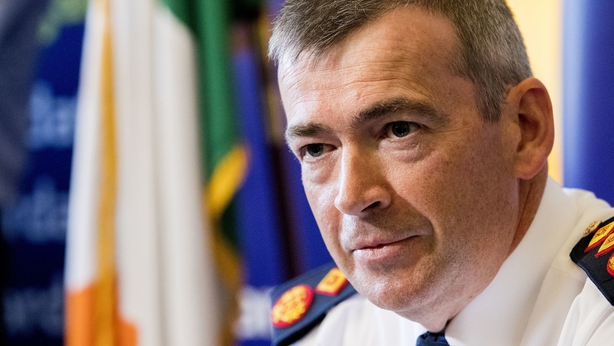 He also said the gardaí adapted a graduated response to policing the event, first deploying community gardaí, and then a small number of public order officers as the event grew more tense in order to ensure public safety.

Commissioner Harris also said that while the people who had occupied the building left peacefully in accordance with the High Court order, before this, a small crowd failed to leave the area despite repeated garda warnings under the Public Order Act and five people were arrested. 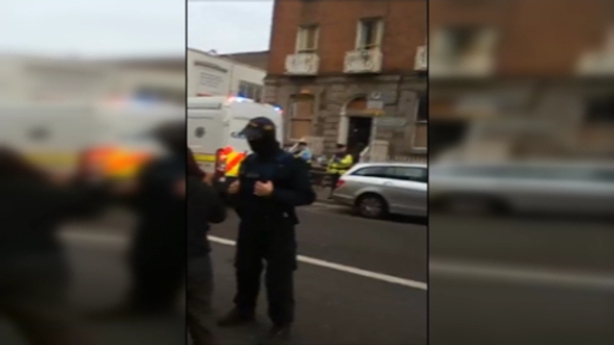 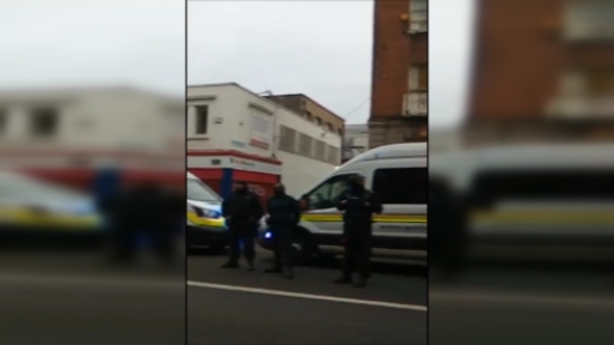 The Chairperson of the Policing Authority has said images of gardaí wearing face masks in central Dublin "are not the kind of pictures that inspire public confidence".

Speaking in Galway this afternoon, Josephine Feehily said she had spoken to the Garda Commissioner about the incident and was pleased that he had issued a statement on the matter.

Ms Feehily said the Authority would be having further discussions with the Commissioner about the issue in the coming days.

She said it was important to remember that gardaí had a very difficult job to do when court orders in relation to property were being executed.

In this instance, there were essentially two issues at play - the role of the gardaí when a court order is being executed and the manner in which they carry out that task.

Ms Feehily said gardaí were charged with safeguarding the public and were entitled to protect themselves.

She said it was important that people were conscious of the risks faced by members of the force.

At the same time, officers have protocols that govern how they go about their business.

She said that as she understood things, Commmissioner Harris had conceded these rules were not followed in full.

Ms Feehily said this was a pity.

Earlier, the Taoiseach said the gardaí must be supported when they are enforcing the law.

Leo Varadkar said that the gardaí involved were wearing badges and were appropriately dressed.

But he said that he did not like to see workers from a private security firm wearing balaclavas.

The Take Back the City group, which organised the occupation of the property on North Frederick Street, staged a protest last night in the city centre in support of five people arrested during the repossession on Tuesday.

Boy given an extra two years before detention reviewed