More than 150 post offices around the country are to close as part of a deal reached between An Post and the Irish Postmasters' Union.

The deal sees 159 postmasters retire and their offices close. The company has said that 16 such post offices have already closed.

They say that all of the offices that are due to close are within 15km of at least one other post office.

An Post also said that all were in locations with a population of less than 500 people. 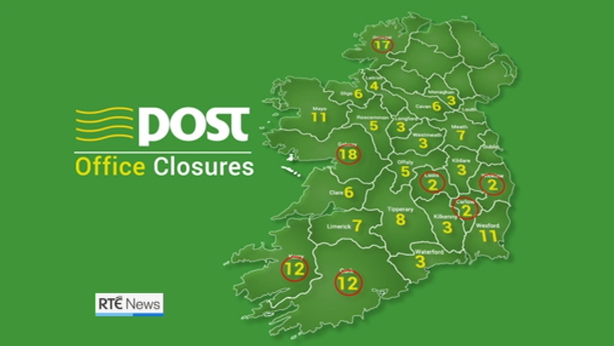 Closing post offices will be consolidated with neighbouring offices, ensuring their viability, the company added.

Debbie Byrne, Managing Director of An Post Retail, thanked the postmasters who have chosen to retire for their great service to An Post and local communities over many years.

"We fully acknowledge that this process will be difficult for some customers and communities but the end result will be a strengthened, viable post office network serving the needs of our country for the future,'' she said.

Western counties are being hit hardest by the closures, with at least 45 to close across counties Galway, Mayo and Donegal.

Fianna Fáil's communications spokesperson has hit out at the announcement.

Timmy Dooley said the announcement "is nothing short of a direct attack on rural communities and will not be tolerated."

"These closures send a very clear message that the State no longer sees rural Ireland as a viable place to live or work," he said.

"Whilst we understand this is a voluntary retirement scheme backed by the Irish Postmasters Union, the Government has shown no interest in keeping our post office network alive and viable," he said

"Sinn Féin has said previously that alternatives to revitalise our post office network are available.

"Post offices have the potential to become community hubs, providing government and local services and we should look at small scale banking similar to that in operation in New Zealand."