RTÉ Crime Correspondent Paul Reynolds has told the Disclosures Tribunal that Garda Headquarters had absolutely no influence over him in news reports he broadcast in May 2016 on the then unpublished O'Higgins Commission report.

The tribunal is examining whether former garda commissioner Nóirín O'Sullivan, using briefing material prepared in Garda HQ, influenced or attempted to influence the broadcasts on RTÉ on 9 May 2016.

Mr Reynolds told the tribunal that did not happen.

The O'Higgins Commission was set up to investigate issues relating to policing in the Cavan/Monaghan district following complaints raised by Garda whistleblower Sergeant Maurice McCabe.

Mr Reynolds said the information contained in his reports on 9 May came from the final O'Higgins Commission report.

Mr Reynolds said he obtained a number of copies from different sources to cross reference and satisfy himself that it was the final report.

The journalist said he also spoke to a number of people and got various information, but the only information published was based specifically on the contents of the report.

Lawyers for the tribunal asked Mr Reynolds if the information he had got from speaking to people in any way influenced what he put into his broadcast. He said he was 100% certain it did not.

Mr Reynolds said he believed that the first Garda Headquarters knew of his broadcasts was when they heard it on the news that morning.

He said he did not work alone and the material he was preparing was seen by a number of different editors, including senior editorial staff and programme editors.

The tribunal has heard and been shown radio and TV broadcasts on Mr Reynolds’ story from 9 May 2016.

Counsel for the tribunal, Kathleen Leader, put it to Mr Reynolds that a broadcast on the News at One radio programme for that that day, which outlined that allegations of corruption against senior gardaí had not been upheld, could be seen to have been presenting a negative view of Sgt McCabe.

Mr Reynolds said he could only report what was in the report, and that if the O'Higgins Commission had found former garda commissioner Martin Callinan or former minister for justice Alan Shatter were guilty of corruption, he would have reported that.

The tribunal also saw copies of emails between Paul Reynolds and senior editorial staff in the run up to the broadcast.

In one email from former chief news editor Ray Burke to Mr Reynolds on 6 May 2016, Mr Burke suggested a change to a draft of Mr Reynolds report because he said it was certain that RTÉ would be subject to suspicion that they were in favour of the gardaí and therefore biased against Sgt McCabe.

In another email from Mr Burke on 8 May, Mr Burke suggested a potential change to the script which he said he believed would "not put the boot in to" Sgt McCabe straight away.

Mr Reynolds said that the language used during discussion about a story could be unparliamentary and robust, and was not intended to be pored over by legal teams at a tribunal.

He said Mr Burke was referring to the fact that RTÉ had to be conscious to be fair to all parties, and could not be seen to be putting the boot into any party.

Mr Reynolds said Mr Burke was referring to the fact that there were very strong criticisms in the O'Higgins report and that the broadcast had to be clear that RTÉ was not the one making those criticisms, but that it was in the commission report. 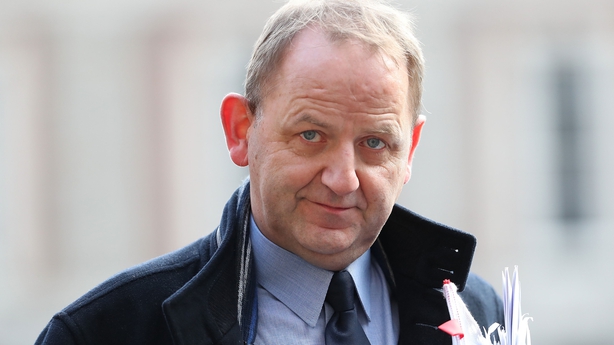 Mr Reynolds told the tribunal that Sgt McCabe was never "branded a liar" in his reports on 9 May 2016, it was never said that he was irresponsible, and that implication could not be taken from the broadcasts.

He said he did not accept that the reports were pro-garda and he said the broadcasts were all based on the findings of Mr Justice O'Higgins.

Mr Reynolds said that RTÉ News gave consideration on whether to report an element of the O'Higgins Commission report that Sgt McCabe told an untruth to a senior officer and that he was aware.

Mr Reynolds said they knew it would be controversial but they had a responsibility to report it even if it was unpalatable. He said it went up the editorial chain and was agreed.

He added that RTÉ News also reported that Sgt McCabe was "never less than truthful in his evidence" to the commission.

He said he checked two dictionaries and that the word "lie" could be used for untruth and he reported that the sergeant had told a lie.

Asked by counsel for the tribunal whether "lie" could be seen as a stronger word than "untruth" and whether that was influenced by Garda Headquarters, Mr Reynolds said it was not and he said they had a duty and a responsibility to tell the truth.

The tribunal heard that Sgt McCabe complained to RTÉ News about the O'Higgins broadcasts shortly after 8am on 9 May 2016, telling Mr Burke that it was "shocking stuff".

Sgt McCabe told Mr Burke he had not lied, as that would be a deliberate false report.

Mr Reynolds said the complaint was discussed by Mr Burke with then acting director general Kevin Bakhurst and they agreed not to change the reports.

The journalist was also asked about evidence of the former head of the Garda Press Office Superintendent David Taylor that on the day of Martin Callinan's resignation, the former Garda Commissioner requested the superintendent to quickly tell Mr Reynolds.

Mr Reynolds said he was claiming journalistic privilege on that.

Mr Justice Peter Charleton said he did not see a good reason for that as an "awful lot of people are saying that Supt Taylor is lying and you frankly are standing in the way of that".

Mr Reynolds said he could confirm that he was called.

No sense that somebody was 'pouring poison' about Sgt McCabe

Mr Reynolds also told the Disclosures Tribunal that he never got a sense that somebody was pouring poison in his ear about Sgt Maurice McCabe.

He was asked about a reference in his notebooks, preparing for the O'Higgins Commission broadcasts, to the 2006 child sexual assault allegation made against the sergeant.

Lawyer for Sgt McCabe, Michael McDowell, suggested to Mr Reynolds that somebody he spoke to "bore down" on the 2006 complaint and was negatively briefing him.

Mr Reynolds said it was not a negative briefing and was just facts. He said he never got a sense that someone was pouring poison in his ear about the sergeant and there was no persistent, consistent, or deliberate hammering way.

He said it was just a conversation on policing in Bailieborough although he would not reveal the source.

Mr Justice Peter Charleton asked why someone would need to bring up the old allegation when the conclusion had been that there was nothing to see, and he asked if that was detraction.

Mr Reynolds said he could not answer that, but the reference related to a suggestion that the investigation should have been handled differently.

Mr McDowell asked how that was relevant to the O'Higgins Commission.

Mr Reynolds said it was relevant to policing in Bailieborough and he said he did not see any of the conversations as casting aspersions on Sgt McCabe.

Mr Reynolds said his notes were based on conversations and he would not stand over the accuracy or provenance of them. He said they were not supposed to be pored over by teams of highly intelligent and well-trained lawyers.

The inquiry is examining whether the O'Higgins broadcasts were influenced, or attempted to be influenced by former Garda Commissioner, Nóirín O'Sullivan.

Sgt McCabe has told the Tribunal that he was told by the Garda Executive Head of HR, John Barrett that the broadcasts must have come from Ms O'Sullivan.

Mr Barrett has disputed this evidence and said he never made that statement.