RTÉ Crime Correspondent Paul Reynolds has told the Disclosures Tribunal that he was not negatively briefed by the former head of the Garda Press Office, Superintendent David Taylor, about Sergeant Maurice McCabe.

Mr Reynolds said the idea that journalists would just freeze and take in what Supt Taylor alleges he said, and just go into a daze, did not make sense.

He said it also was not possible that he was separated from other journalists at murder scenes to get negative briefings.

Supt Taylor has named Mr Reynolds as one of 11 journalists he alleges he negatively briefed about Sgt McCabe.

Mr Reynolds also said he never spoke to either former garda commissioner, Nóirín O'Sullivan or Martin Callinan, about the whistleblower in a negative connotation.

On the Ms D allegation, Mr Reynolds said he first heard about it sometime in 2013. He said he heard it related to sexual abuse, perhaps relating to a minor, that it was investigated, with a file sent to the DPP and no prosecution.

He said that it was always in the context that there was nothing in it.

Mr Reynolds also said he had never heard that Sgt McCabe was embittered after the investigation and he said that would not have made sense because the sergeant was exonerated.

Mr Reynolds was also questioned by counsel for the tribunal about a story he reported on 24 February 2014 saying that Sgt McCabe had been directed to co-operate with the internal garda inquiry on penalty points by Mr Callinan.

He said he based the story on having seen the direction issued to Sgt McCabe. He said this was not given to him by Supt Taylor although he would not reveal where he got it from.

Mr Reynolds said the story was updated to include an official comment from Supt Taylor that the garda commissioner said he had issued a direction to the sergeant.

He also said he sought a comment from Sgt McCabe, but when they spoke that evening, the sergeant declined to give him a response and gave it instead to RTÉ Prime Time. He said he incorporated that into later versions of the story.

In his evidence in March, Sgt McCabe said he was not directed to co-operate with the inquiry.

Supt Taylor has alleged he was instructed by Mr Callinan to brief the media that Sgt McCabe had refused to co-operate with the inquiry.

Mr Reynolds said he was never briefed by Supt Taylor to that effect, and he also did not report that Sgt McCabe had refused to co-operate. He said the direction stood for itself and the story was not wrong.

The tribunal is also examining a series of RTÉ broadcasts from 9 May 2016 based on the then unpublished O'Higgins Commission report. It is investigating whether Ms O'Sullivan influenced or attempted to influence the broadcasts.

Mr Reynolds said the source for his broadcasts was the final O'Higgins Report, but he could not reveal where he got it from.

All of the RTÉ radio broadcasts from that day relating to the report were played at the tribunal.

The inquiry has adjourned for today.

Mr Reynolds will return tomorrow when the TV broadcasts will also be played.

Mr Reynolds also told the tribunal that he never spoke to journalist and lecturer Professor Colum Kenny about Sgt McCabe.

Mr Kenny has named Mr Reynolds as one of two journalists he claims told him that Sgt McCabe was under investigation for child abuse at a committee meeting at Leinster House on or around 19 Feburary 2014.

Mr Reynolds told the tribunal he was not at the committee meeting on that date.

Asked if it could have happened on another date, Mr Reynolds told the tribunal the conversation never happened. 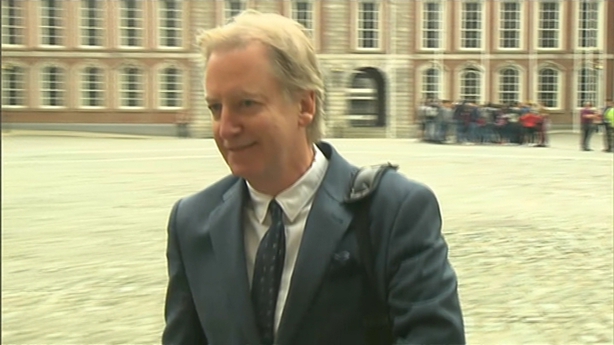 Earlier, Irish Independent journalist Paul Williams said he did not consider confirmation he received of a sexual assault allegation against Sgt McCabe to be part of a smear.

Mr Williams was asked about an interview he did with a Ms D in 2014.

The woman had made a sexual assault complaint against the sergeant in 2006, which was dismissed by the Director of Public Prosecutions as not constituting a crime.

Mr Williams said that after the interview, he rang Supt Taylor to confirm details of the assault complaint and the garda investigation.

He said Supt Taylor confirmed some of the details of the complaint to him.

Mr Williams was asked by counsel for the tribunal whether he considered the provision of confirmation of a sexual assault allegation to be part of a smear. Mr Williams said he did not.

He said he asked questions for a living and people answered them, he said he just wanted to know did the investigation take place.

Mr Williams said he had no prior discussion with Supt Taylor about the visit to Ms D's house and he said the reason he ended up there was because he got a call from her father through Detective Superintendent John O'Reilly.

Mr Williams was also asked why he did not approach Sgt McCabe to get his side of the story.

He said he did not need to, as the sergeant was not going to be named in the article and the piece was about a suggestion by the alleged victim that the garda investigation was flawed.

Mr Williams said he kept it very straight with Supt Taylor and told him the bones of the story.

He also said that he would tell the tribunal if former garda commissioners Ms O'Sullivan or Martin Callinan had given him information about the allegation, because of their waivers to the inquiry.

He said he did not have anything to hide from them.

Mr Williams disputed evidence given by Supt Taylor that he had rung the superintendent from Ms D's house and said "guess where I am".

Mr Williams said that was not correct and that phone records showed they did not speak on the day he visited the house.

Mr Williams also said he had not been negatively briefed by either former garda commissioner or Supt Taylor about Sgt McCabe.

He also said he had not been briefed by any garda member about the allegation against Sgt McCabe.

Supt Taylor has named Mr Williams as one of 11 journalists he said he did brief negatively about the whistleblower.

Mr Williams said he was very confused about what exactly Supt Taylor was alleging and he said Supt Taylor had not provided any dates or times.

Mr Williams also said he did not go to crime scenes or news conferences.

Counsel for Supt Taylor, John Ferry, said that the superintendent says there had been prior communications in 2013 with Mr Williams about the allegation against Sgt McCabe. Mr Williams said that was not true.

The journalist also gave evidence last July when he was questioned in detail about how he came into contact with Ms D and the later articles he wrote.

Mr Williams told the tribunal that the D family told him when he visited their home that two journalists, Debbie McCann and Eavan Murray, had called to the house prior to that.

Ms Murray has told the tribunal that she called to the house after Mr Williams had already been there and had conducted an interview with Ms D.

Mr Williams told the tribunal that the protagonists in the allegation of a smear campaign against Sgt McCabe had all signed waivers and that if anybody had negatively briefed him he would say it.