Former Garda Press Officer Superintendent David Taylor has told the Disclosures Tribunal that he cannot put an exact date on when he realised the alleged smear campaign he claims to have been directed to carry out against whistleblower Sergeant Maurice McCabe was wrong.

Supt Taylor was giving evidence for a third day to the inquiry, which is examining his allegation that former garda commissioner Martin Callinan instructed him to brief the media negatively against Sgt McCabe, and that this was done with the knowledge of former commissioner Nóirín O'Sullivan.

Both Mr Callinan and Ms O’Sullivan deny the claims.

Counsel for Mr Callinan and Ms O'Sullivan, Mícheál O'Higgins asked Supt Taylor when it had dawned on him that the alleged smear campaign was wrong.

Supt Taylor said he could not give an exact date.

He said it was an evolution in his thought process and he made a protected disclosure in September 2016.

The tribunal heard evidence in relation to the statement Supt Taylor made to the inquiry about how he alleges the smear campaign was carried out.

In his statement, Supt Taylor said he was to say to journalists in conversation that Sgt McCabe was motivated by revenge in relation to an allegation made against him in 2006 which was dismissed by the DPP.

The tribunal heard that Supt Taylor's statement said that "it was put in such a way that there was no smoke without fire".

Mr O'Higgins put it to Supt Taylor that the phrase "no smoke without fire" would have meant that there was something in the allegation against Sgt McCabe.

Supt Taylor said he did not accept that.

He said his instruction had been to say to journalists that in bringing matters relating to policing and penalty points into the public arena Sgt McCabe was motivated by revenge.

Supt Taylor told the tribunal that the alleged campaign stopped after Mr Callinan had retired and he was no longer working for him.

He said he had never had any conversation with Ms O'Sullivan or with the Director of Communications for An Garda Síochána, Andrew McLindon, about stopping the smear campaign.

Supt Taylor has told the tribunal that both Ms O'Sullivan and Mr McLindon were aware of the negative briefing. Both deny this.

Mr O'Higgins also questioned Supt Taylor about the reaction of a number of journalists he claims to have briefed negatively against Sgt McCabe.

Supt Taylor said the journalists did not express any reaction to what he was telling them about Sgt McCabe.

The superintendent said the journalists just heard what he was saying and how they processed it after that was their prerogative.

The tribunal has heard that of the 11 journalists, who Supt Taylor claims to have briefed negatively about Sgt McCabe, a number have denied being briefed and others are claiming privilege in relation to their contact with the superintendent.

Supt Taylor has denied that he leaked a story to a newspaper that a Roma child had been taken into care.

The inquiry has heard that a garda investigation into the incident recommended to the Director of Public Prosecutions that he be charged with leaking unauthorised information.

Mr Justice Peter Charleton asked Supt Taylor if he was, at least in part, the author of the story coming into newspapers. Supt Taylor said he was not.

He also denied that he had seen the patrol officer's report into the incident.

Supt Taylor was also questioned about a legal challenge he brought in 2016 aimed at stopping the criminal investigation and the disciplinary proceedings into him.

As part of his judicial review, he alleged that that his arrest in May 2015 was made for the purpose of exerting pressure on him and to cause embarrassment and inflict emotional pain.

He was asked by Mr Justice Charleton whether he was saying the arrest was not genuine.

Supt Taylor said he was not disputing the arrest but he said it was a traumatic event.

Asked by lawyer for An Garda Síochána, Mícheál O'Higgins, if he was abandoning the claims, Supt Taylor said he was not suggesting the gardaí did anything improper, but he said it did cause embarrassment.

He said he turned up at the garda station by appointment and he was not a flight risk, or any other risk.

Mr O'Higgins asked if he was saying the arrest was heavy handed and he was treated disrespectfully.

Supt Taylor said it was very robust and he was stripped of his shoes, and his epaulettes, and placed in a cell.

He also said that Ms O'Sullivan would not have been his "number one choice" for commissioner but he said it was a decision of government.

He was moved from the press office in June 2014. Asked if he was not happy with the move, he said he was disappointed as he felt he had done a good job and enjoyed the work.

Mr O'Higgins suggested to him that he took it very hard indeed and he took it personally and regarded it as a "significant and dramatic fall from grace".

Supt Taylor said he took the transfer, he did not appeal it and he got on with business. 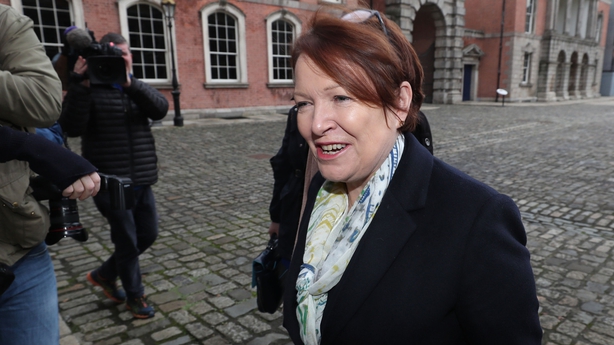 Supt Taylor has rejected suggestions that he made his allegation about a smear campaign by as part of an attempt to "do down" Ms O’Sullivan.

Mr O’Higgins put it to Supt Taylor that nobody would have believed a claim purely against Ms O’Sullivan as she was deputy commissioner at the time.

Mr O’Higgins suggested that Supt Taylor therefore had to involve Mr Callinan in the allegation.

Supt Taylor rejected that and said he did not accept the point Mr O’Higgins was making.

During cross-examination, Mr O’Higgins suggested to the superintendent that his protected disclosure was part of a campaign with an objective of bringing down Ms O’Sullivan.

Mr O’Higgins suggested the superintendent was bitter in relation to a criminal investigation which he perceived as targeting him. Supt Taylor denied this.

Supt Taylor was arrested and suspended from duty in relation to a disciplinary process and criminal investigation into the alleged unauthorised release of information. The DPP later directed no prosecution in the case.

Supt Taylor today said he accepted the investigation was legitimate.

The tribunal heard that Independent TD Mick Wallace had made a statement and provided handwritten notes to the tribunal in relation to a meeting he and TD Clare Daly had with Supt Taylor in October 2016.

The notes made reference to Ms O’Sullivan and contained the phrase "when she moves she’s lying", which the tribunal heard related to a claim that Supt Taylor had said that you could tell when Ms O’Sullivan was lying because she moved in her seat.

Supt Taylor said those were not his words.

Mr O’Higgins asked Supt Taylor if he had made derogatory remarks about Ms O’Sullivan during the meeting and called her a liar.

The superintendent denied this.

Mr Wallace’s notes also contained reference to Ms O’Sullivan’s husband, Detective Superintendent Jim McGowan, who was part of the team that carried out the criminal investigation into Supt Taylor.

Supt Taylor acknowledged that he told Mr Wallace he thought it was unusual that the then Garda Commissioner would appoint her own husband to investigate him.

The tribunal has previously heard evidence from Chief Superintendent Francis Clerkin, who led the investigation, that he appointed Detective Supt McGowan to the team.

She rejected suggestions that she and her husband had developed a fixation on the role of Ms O'Sullivan's husband, Detective Chief Supt Jim McGowan, in the criminal investigation into Supt Taylor.

Ms Taylor said she had got a bit upset when she had seen that Ms O'Sullivan's husband was involved in the investigation.

Ms Taylor said she had just been hoping to get objectivity in the investigation.

She was asked about a statement she made to the tribunal that she believed Ms O'Sullivan had been "anxious to get a charge" on her husband.

Ms Taylor said she had felt it was awkward for her and Supt Taylor if Ms O'Sullivan's husband was on the investigating team.

When asked if she had a sense that her husband was unjustly or unfairly the subject of a criminal investigation, Ms Taylor said she did not really have an opinion on that.

The tribunal adjourned for the day following Ms Taylor's evidence.

The tribunal is due to hear from the former justice minister Alan Shatter and the former Martin Callinan in the coming days.