Dublin Fire Brigade crews remain at the scene of a major blaze which has gutted at least five upper floors of Ballymun's Metro Hotel.

Firefighters wearing specialist breathing aparatus are making their way through the hotel, to dampen down flames and extinguish hot spots.

The fire broke out at around 8pm in a private residence on the 13th floor above the rooms for hotel guests, but soon spread to other floors. 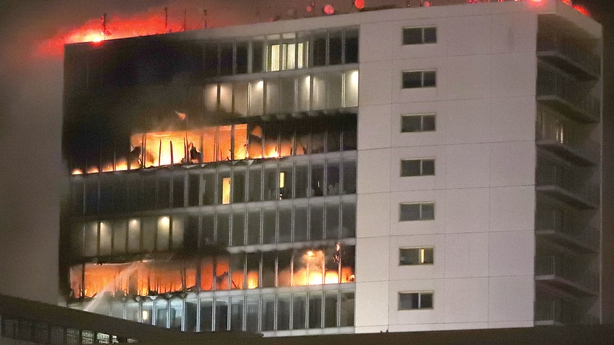 Garda traffic diversions are in place around the area which are expected to cause disruption for motorists during the morning.

We'll have 4 fire engines on scene at the #BallymunFire overnight to damp down & extinguish hot spots. Road closures are likely to affect traffic in the morning #Dublin #fire #Ballymun @DCCTraffic @aaroadwatch pic.twitter.com/qewyJlUvHV

The hotel guests have been relocated to the nearby Carlton Hotel for the evening.

A spokesperson for the Dublin Region Homeless Executive has confirmed there were no homeless families being accommodated at the hotel.

The hotel was used as temporary, homeless accommodation in recent years, but there are no families living there currently.

The Peter McVerry Trust also said that there were no homeless families staying there who had booked their own accommodation.

RTÉ’s Aengus Cox reports from the scene of the Ballymun fire pic.twitter.com/tsqm5XV6Jv

One witness told RTÉ News that the fire broke out in the room 1303, which was next door to his own room.

He said he looked out on the balcony and saw flames in the room, and then went to tell reception and the fire service.