The European Court of Human Rights has rejected a request by Ireland to find that the so-called 'Hooded Men' detained by the UK suffered torture.

The European Court of Human Rights delivered its judgment this morning on whether or not the treatment of 14 men interned in Northern Ireland in 1971 amounted to torture.

The Government sought the review of what happened to the men in 2014 on the basis of new information disclosed by the RTÉ Investigations unit.

The 14 men, who were all Catholics, were detained indefinitely without trial and said they were subjected to a number of torture methods.

These included five techniques - hooding, stress positions, white noise, sleep deprivation and deprivation of food and water - along with beatings and death threats.

The men were hooded and flown by helicopter to a secret location, later revealed as a British Army camp at Ballykelly, outside Derry.

Francie McGuigan, one of the hooded men, calls on Govt to appeal European Court of Human Rights ruling on torture pic.twitter.com/Hg9WGkCA21

They were also dangled out of the helicopter and told they were high in the air, although they were close to the ground.

None were ever convicted of wrongdoing.

The Government first took a human rights case against Britain over the alleged torture in 1971.

The European Commission ruled that the mistreatment of the men was torture, but in 1978 the European Court of Human Rights held that the men suffered inhumane and degrading treatment that was not torture.

The UK did not dispute the finding.

The new evidence has thrown doubt over the 1978 ruling by the European Court of Human Rights.

It includes a letter dated 1977 from then-home secretary Merlyn Rees to then-prime minister James Callaghan in which he states his view that the decision to use "methods of torture in Northern Ireland in 1971/72 was taken by ministers - in particular Lord Carrington, then secretary of state for defence".

Mr Rees added that "a political decision was taken".

Today, the court found that the Government had not demonstrated the existence of facts that were unknown to the court at the time or which would have had a decisive influence on the original judgment.

Therefore, there was no justification to revise the judgment, the court stated.

The revision request was dismissed by six votes to one. The judge elected in respect of Ireland issued a dissenting opinion.

Judge O’Leary says the majority of the 7-member Chamber "opted for an extremely narrow version of what the Court was dealing with in 1976-1978".
/2

One of the 'Hooded Men' - Francis McGuigan (below) - said he was dismayed and disappointed with decision, but said it was only a setback on a long and hard struggle.

Speaking at a press conference in Belfast, he said the court had missed a great opportunity to stamp out torture all over the world and called on the Government to appeal the decision.

He said the judgment reinforces the notion that governments can drag citizens from their bed and degrade and humiliate them, and he still classifies what happened to him as torture. 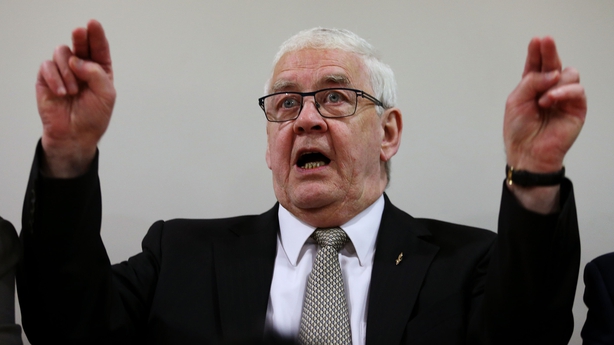 Another of the 'Hooded Men' - Liam Shannon - said the ruling was a disgrace and that he did not need anyone, including the court, to tell him they were tortured.

"We know we were," he said, adding torture had to be stopped.

A solicitor for the group, Darragh Mackin, said a key aspect of today's judgment was that the only dissenting voice in the court was the Irish judge.

They said it was a bad day for justice and their fight will go on.