Thousands of people have attended St Patrick's Day parades throughout the country.

President Michael D Higgins and his wife Sabina attended the parade in Dublin, which kicked off at around midday.

They added numbers were down on previous years due to the cold conditions and the Ireland-England rugby match.

Meanwhile, Taoiseach Leo Varadkar has marched in the New York St Patrick’s Day parade on the final day of his week-long visit to the US.

The event, up until recently, had a ban on LGBT groups taking part.

Before the parade, Mr Varadkar spoke at a breakfast event hosted by the Mayor of New York Bill de Blasio before attending mass in St Patrick's Cathedral.

The Taoiseach said the fact that he was marching in the New York St Patricks Day parade with his partner was a sign of change and great diversity. 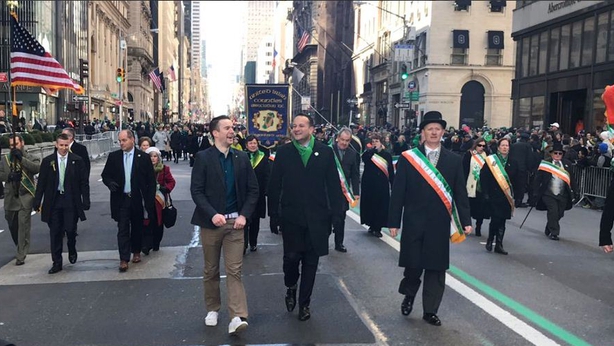 Hundreds of thousands of people have been celebrating St Patrick's Day here and around the world. In Dublin, the Grand Marshall for this year's parade was actor and Game of Thrones star Liam Cunningham pic.twitter.com/IEW3TfCEPV

With parades taking place in other countries around the world, Tourism Ireland's Global Greening campaign will see around 290 major landmarks and sites in 48 countries being lit up in green.

Gardaí in Cork have said up to 30,000 people attended Cork city's annual parade, now in its 116th year.

This year it celebrated 100 years of the vote for women, with 14 of the 25 women who have represented the city in the Dáil, Seanad or Cork City Council since 1918, as this year's Grand Marshals.

Over 3,000 people from community, sporting and voluntary groups took part including the Rebel Wheelers, and among the newcomers, members of the Cork County Cricket Club reflecting the growing interest in the sport.

There was plenty of music provided by the 1st Band of the Southern Command, the Barrack Street Brass & Reed Band, and the CIT School of Music Samba Band.

Among the overseas visitors were the Texas Hendrickson Silver Dancers and the Jersey City Police Emerald Society.

Twenty other  parades took place in the county, the earliest in Ballydehob beginning at 11.30am, the smallest on Cape Clear after the midday ferry, and last schedule parade will be in Courtmacsherry.

The theme at this year's Limerick parade was the circus, as it celebrated 250 years as an art form.

Many circus acts took part as well as participants from the city's sports clubs, communities, schools and businesses.

The Parade Grand Marshall this year was Marion Fossett, ringmaster of the Fossett family circus, which is performing in Limerick over the St Patrick's weekend.

An estimated 40,000 people were expected to line the city's O'Connell street as 4,000 participants marched in the parade.

In Ennis, Co Clare, an estimated 10,000 people turned out to watch the parade which this year celebrated its status as 'Ireland's friendliest place' and which is the theme of its parade.

He received the honour in recognition of his efforts to bring wellness programmes to young people in Clare, as well as becoming the first Clare person to summit the world's highest mountain in 2017.

An estimated 50 groups from across the community including sports clubs, bands, music groups, schools and businesses took part highlighting the many different aspects of Ennis and Co Clare life.