The Disclosures Tribunal has heard that after former garda commissioner Martin Callinan publicly referred to Maurice McCabe's actions as "disgusting", it was open season on the sergeant in Mullingar Garda Station.

Garda Head of Human Resources John Barrett continued his evidence at the tribunal today. He was taken through his minutes of his first meeting with Sgt McCabe in February 2015.

Mr Barrett had been asked by then garda commissioner Nóirín O'Sullivan to act as interlocutor to help deal with the sergeant's workplace issues.

The tribunal is examining whether or not Ms O’Sullivan inappropriately relied on unjustified grounds to discredit Sgt McCabe at the O’Higgins Commission.

At the meeting, Sgt McCabe said he could handle being blanked at Mullingar Station.

However, after Mr Callinan's remarks at the Public Accounts Committee in January 2014, Sgt McCabe said a number of gardaí in Mullingar felt they had support for their actions to "take it out on Maurice" and it was open season on him.

Mr Barrett said today that he was concerned by Sgt McCabe's description of his working conditions and he said no human being could come through what he had been through without it having a profound effect.

Sgt McCabe told Mr Barrett that he was nervous and only sleeping two hours a night.

Mr Barrett said that was how he read it. He also said he was impressed by the sergeant at their first meeting and he found him credible.

Sgt McCabe also told him at that meeting that the Garda Representative Association was a real problem and he said that "if a sergeant says put your tie on, it's bullying" and he said discipline was gone.

After the meeting, senior management including Ms O'Sullivan also met to discuss the outcome. Mr Barrett joined the meeting on speakerphone.

Former minister for justice Frances Fitzgerald had written to Ms O'Sullivan seeking a response in terms of a solution to Sgt McCabe's workplace issues by the following day.

The tribunal heard that Ms O'Sullivan told the meeting that Sgt McCabe had no faith in local garda management.

Mr Rogers said one gets the impression that the garda commissioner was pressing to have these issues addressed and Mr Barrett agreed.

He said Ms O'Sullivan was committed to a process of change.

Mr Barrett also agreed that Sgt McCabe's view was that An Garda Síochána operated with a culture of fear and he accepted that it was a credible position for Sgt McCabe to take.

A superintendent who had input into the drafting of a letter containing a mistake that was sent to the O’Higgins Commission has said he is embarrassed by the error.

Superintendent Noel Cunningham told the tribunal that he was embarrassed if the mistake had caused any distress to whistleblower Sgt McCabe, and that there was never any intention to do that.

He said it was a mistake, nothing more, nothing less.

Supt Cunningham was giving evidence about a letter sent by the garda commissioner’s legal team to the private inquiry in May 2015.

The letter stated incorrectly that Sgt McCabe brought a complaint against a senior officer in order to get something he wanted. 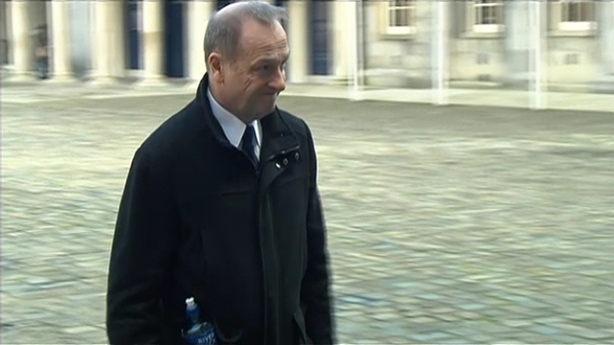 Supt Cunningham told the tribunal he met Sgt McCabe in Mullingar in August 2008.

The meeting took place after Sgt McCabe had made a report and complaint to another senior officer relating to the aftermath of an investigation into an allegation that had been made against the sergeant, which the DPP had dismissed.

The tribunal heard notes and a report of the Mullingar meeting showed that Sgt McCabe had brought a complaint to the senior officer.

This was also reflected in notes taken during consultations between the garda legal team and their clients in the days before the O’Higgins Commission hearings started in May 2015.

However, a letter the legal team submitted on 18 May 2015 stated incorrectly that Sgt McCabe had brought a complaint against the senior officer.

Supt Noel Cunningham said that on the morning of 18 May before the document was submitted he was given a hard copy of it but did not get an opportunity to read it fully before signing it.

He said if he had taken five minutes or held on to the document to read it there was not a shadow of a doubt he would have seen the error.

Supt Cunningham said he believed the letter had been sent to him the day before but said he did not see it. He said at best he had read it on his phone.

Supt Cunningham was asked if he had been present during Sgt McCabe’s evidence at the O’Higgins Commission on 18 May 2015 when the incorrect proposition from the letter was put to him by senior counsel for the garda commissioner Colm Smyth.

Supt Cunningham said he could not recall if he had heard the exchange clearly and said it was confused.

He said if he had been clear in his mind at the time he would have said that it was wrong.

Supt Cunningham was also asked about a later submission from the garda legal team sent to the commission on 11 June 2015, which repeated the error.

He said he had been sent a copy of the submission in advance and had responded to it by sending back a copy of his report of the 2008 Mullingar meeting to clarify the situation.

The tribunal heard that Supt Cunningham’s report and notes of that meeting were largely similar to a transcript from a tape recording of the meeting that was submitted to the commission.

Supt Cunningham said he did not know if he had subsequently read the submission to check it had been corrected, but said he must not have done that.

Supt Cunningham said he could not for the life of him understand why his counsel has told the Tribunal that the error in the letter of 18 May was included on the instructions of his client.

Under cross-examination, Sgt McCabe's lawyer Michael McDowell put it to Supt Cunningham that in his evidence, the Garda counsel at the O'Higgins Commission, Colm Smyth, said that he was left in no doubt and had a clear perception that the complaint was made "against" Superintendent Michael Clancy rather than "to" Supt Clancy.

Mr Smyth has told the Tribunal that the error was not a mistake of counsel or a clerical error.

Supt Cunningham said he could not for the life of him understand why Mr Smyth had said that.

Asked if the error was counsel's fault, Supt Cunningham said it was not for him to apportion blame.

He said he had taken responsibility for what he had done wrong in terms of not seeing the error.

Supt Cunningham was also asked about a suggestion in legal submissions to O'Higgins in June 2008 that Sgt McCabe had a "tendency to exaggerate".

Supt Cunnigham said that was "absolutely not" included on his instruction.  He also denied that he had supplied information that Sgt McCabe had a "disaffection".

Supt Cunningham said that was not his assertion or contention.

Mr McDowell put it to Supt Cunningham that the letter was not a clerical error but was instead a "massive intellectual and factual mistake" suggesting that his meeting with Sgt McCabe in Mullingar in August 2008 was somehow relevant to the Sergeant's credibility.

Mr McDowell said none of it spoke to Sgt McCabe's credibility, integrity and motivation.

Supt Cunningham agreed with the lawyer representing Mr Smyth that counsel were relaying on him to identify factual errors in the letter and in later submissions.