More than 100 people have taken part in a protest over pay and conditions for rank and file members of the Defence Forces.

The demonstration was organised by the Wives & Partners of the Defence Forces (WDPF) group.

A wreath was laid at the national memorial at Merrion Square in honour of deceased Defence Forces members.

Members of the Irish UN Veterans Association, which organised the ceremony, then took part in a march to Leinster House.

Family members of Defence Forces personnel addressed the crowd outside the Dáil.

After the demonstration, a smaller group resumed a vigil and will stay outside Leinster House overnight.

The WPDF supports the families of enlisted Defence Forces personnel. 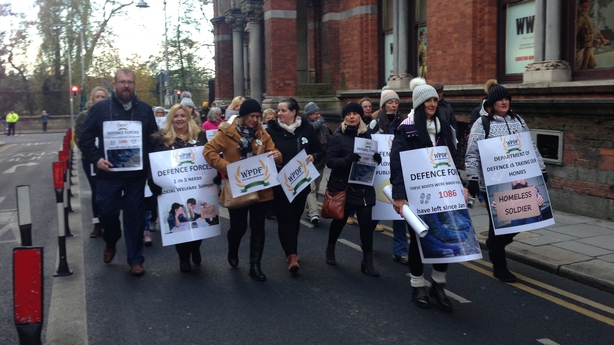 The group say low pay means their loved ones are some of the poorest paid public servants, and some are struggling to meet food and living costs, with some dependent on the Family Income Supplement.

The WPDF said the allowance paid to Defence Forces personnel for a 24-hour security duty has been cut to just under €20 after tax.

A Department of Defence spokesperson said pay increases and arrears for Defence Forces members under the Lansdowne Road Agreement had started in July, and that the Public Service Stability Agreement 2018-2020 would restore pay to all public servants earning up to €70,000.

In the Dáil Labour Party leader Brendan Howlin called for a bespoke pay review for the Defence Forces.

Tánaiste Simon Coveney said there had been pay increases in recent months and that the Public Service Stability Agreement provided for rises.

However WPDF says allowances, which supplemented very low wages, had also been hit by cuts.

Shelley Cotter, from the WPDF, has been campaigning with other wives and partners of Defence Forces' personnel for the last year to raise awareness of their situation.

Speaking on RTÉ's Morning Ireland, she said the campaign group was set up a year ago after she met "two army wives in Cork by chance who were both suffering hardships".

She outlined the difficulties that some families of the Defence Forces face.

"We have family members ringing us saying they can't afford to feed their children a hot meal and they try to make a game of giving them breakfast cereal for their dinner," she said.

She said some families can only survive because they are in receipt of Family Income Supplement, a weekly payment to people on low wages who have children.

She said since the public sector pay cuts in 2009, members of the Defence Forces were the worst hit as "the pay cuts were not scaled". 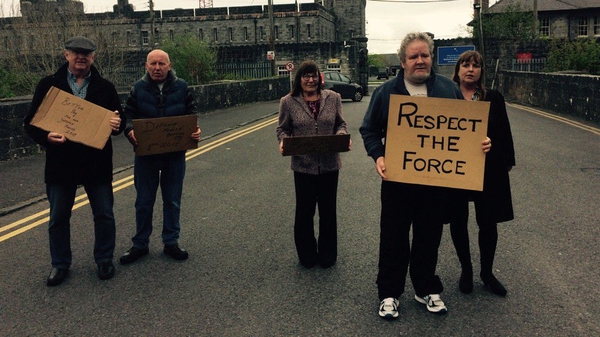