The Citizens Assembly has voted in favour of removing Government subsidies on peat extraction, with 97% of assembly members voting for its removal.

The subsidies are critical for the survival of the fired-power stations in the midlands.

There was an emphasis that the money should instead be spent on peat bog restoration and making proper provision for the protection of the rights of the workers impacted.

When it came to how soon the subsidies for peat should end however, 39% of assembly members voted to end the subsidies immediately; 61% said they should be ended over a five year period.

The 99 ordinary members of the assembly heard from expert after expert about the science, the challenges, about what other countries are doing about climate change, and about how Ireland is lagging far behind.

On the issue of higher taxes and carbon intensive activities which would be increased year after year, 80% voted in favour.

There was very strong support for the promotion of electric cars with 96% in favour of progressively increasing taxes and petrol, diesel, motor tax, and VRT on petrol and diesel cars.

There was very strong support also at 89% for taxes to be imposed on the greenhouse gas emissions from agriculture but to reward farmers for land use activities that help to store carbon.

The full list of the 13 recommendations, which were overwhelmingly endorsed by the Citizens’ Assembly, and the percentage of votes in favour can be seen here. 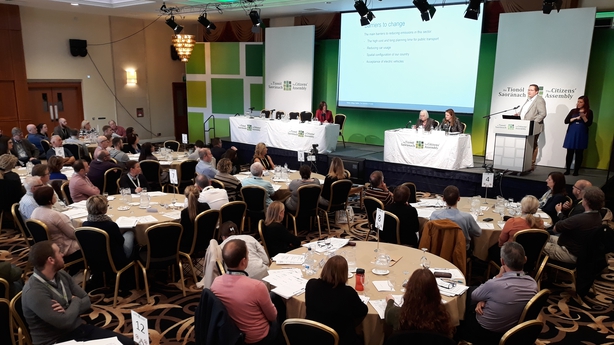 The Minister for Climate Action and Environment welcomed the contribution made by the members of the Citizens’ Assembly and by the various speakers and contributors to the critical and urgent issue of climate change over the course of two full weekends.

Denis Naughten said that he will study the 13 recommendations of the Citizens’ Assembly systematically and comprehensively.

He said it is very clear from the results of the assembly votes that as a nation, we are engaged and ready to move-on from the model we inherited from the industrial revolution.

He said that it also requires resources, sustained policy change and engagement with wider society.

But the Minister said that people cannot be commanded, they must be consulted and that society cannot be changed by diktat.

Mr Naughten said that Ireland’s first ever statutory National Mitigation Plan, published last July, is an important first step and faces up very frankly to the fact that we are coming from behind where we should be, and that the distance we must go is challenging.

The Minister said the National Mitigation Plan is a whole of Government plan and a living document, and that ministers in agriculture, in the built environment and in transport are in law directly accountable to the Oireachtas for delivery.

The Director of the environmental NGO 'Friends of the Earth' described the outcome of the Citizens’ Assembly as "a clarion call for the Government to immediately step up climate action".

In a statement, Oisin Coghlan said: "These common-sense, practical recommendations for climate action will not get us from laggard to leader.

"But they will allow us to catch up with our European neighbours. If implemented by Government they will end nearly a decade of dithering and delay".

Earlier, the Chairman of the Climate Change Advisory Council, Professor John Fitzgerald, said that Ireland will miss its 2020 emissions targets by more than the Government expects, and that the problem is getting bigger.

Prof Fitzgerald told the assembly that the science of climate change is well understood, but the answers to it are very complex.

He said that Ireland needs new policies - and different policies that are going to make a difference.

He said that while the National Mitigation Plan published by the Government in July was welcome, the Government could do better and needs to work harder to address the climate challenge.

He also said that Ireland is a very long way from its 2030 and 2050 targets and the longer policy changes are delayed, the more expensive it will be.