A plaque commemorating an Irish army commandant whose tactical genius saved solders' lives and was depicted in the film the Siege of Jadotville was unveiled in Co Kerry today by former Taoiseach Enda Kenny.

The late Colonel Pat Quinlan from Caherdaniel, Co Kerry, was Commandant of 'A' Company, 35th Infantry Battalion, in September 1961 when he and his men came under attack from 3,500 mercenaries and rebels at Jadotville in the state of Kantanga in the Congo.

The Irish company, comprising 158 soldiers, was part of a UN peacekeeping force in the country. 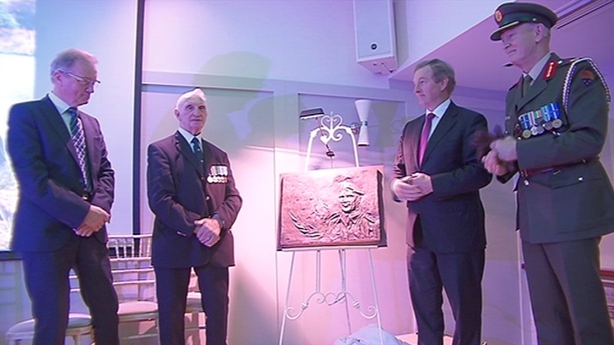 The company suffered no fatalities and inflicted heavy losses on their attackers before being forced to surrender when supplied ran out after five days.

Commandant Quinlan's action is cited in military textbooks worldwide as the best example of the use of the so-called perimeter defence.

A monument to the Caherdaniel man was due to be unveiled at Coomakista Pass but the ceremony had to be held indoors due to heavy fog.

At the unveiling, former Taoiseach Enda Kenny said the plaque, sculpted in Valentia slate by local sculptor Holger Lonze, is a fitting tribute to the leadership, courage, bravery and professionalism of the late Col Quinlan.

Jadotville veteran soldier, Noel Carey, aged 80, said today's commemoration was a very emotional day for all the survivors of Jadotville.

He said their survival was thanks to the brilliance of the late colonel.

Col Quinlan's son Leo thanked Kerry County Council who organized the commemoration and said that the monument was not just for his father, it was for all those who served with him at Jadotville.

Earlier this year it was announced that all Jadotville veterans and the next-of-kin of deceased veterans would receive a special medal recognising their bravery and courage, at a ceremony to take place this coming December in Athlone.

Last year, the 'A' Company was awarded a presidential unit citation for its collective role in the siege, 55 years after it had happened.