Close to 300,000 people expected to attend the three-day event at Screggan.

Gardaí have asked those travelling to the event to be patient and to follow the suggested route signs that have been marked out rather than routes suggested by sat navs.

With over 100,000 people per day from every part of the country expected to converge near Tullamore for the ploughing, traffic management is key.

Gardaí have been planning and preparing for the event since March and there will be over 300 members of the force per day involved in the operation.

Over 30km of steel trackway has been laid to make it easier for visitors to the event to get around. And with over 5,000km of electric cable laid there is enough electricity to power a small town of 8,000 people.

There is over €45m worth of machinery on display in addition to more than 1,700 exhibitors and trade stands.

Pre-bookings for the ploughing are up on last year with a particularly strong interest from colleges and schools from as far afield as the Aran Islands.

Opening the event, President Higgins said farming is a valuable way of life that needs nurture, support and understanding and that the struggle of rural communities is something that should concern us all. 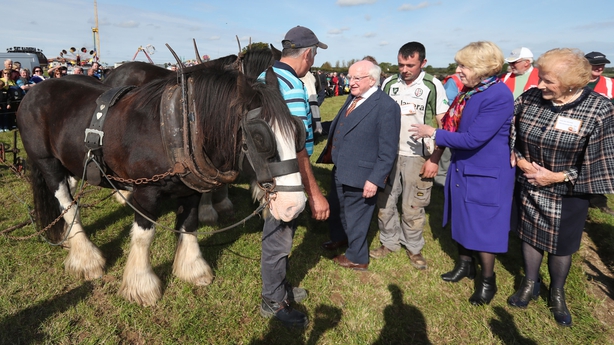 He warned about the vulnerability of farming and his concerns that unbalanced development, rural population loss, and depletion including loss of services such as post offices, shops, banks, pubs and restaurants and health services and how that impinges on the whole of society.

Meanwhile when speaking on RTÉ's Today with Sean O'Rourke programme, Mr Higgins said he will announce his decision on a second term in office next summer.

When asked about his intentions, the President said he "won't rule anything out."

Farmers 'suffered' as a result of Brexit

President of the Irish Farmers' Association Joe Healy has said farmers have already suffered as a result of Brexit and the situation is not much clearer than it was a year ago.

Speaking on RTÉ's Morning Ireland from the Ploughing Championships, Mr Healy said it was important, at political level, to keep the closest possible trading ties between the UK and the EU.

Mr Healy said volatility with the exchange rate and the uncertainty it is creating, is costing farmers a lot.

Irish Creamery Milk Suppliers Association President John Comer said business in the industry is good but that the volatility is difficult to deal with.