Employers are calling for what they claim are ongoing problems with an upgraded recruitment website run by the Government to be fixed.

Two years after the Department of Social Protection awarded a €3.4 million contract to two companies to build a new version of JobsIreland.ie, the Restaurants Association of Ireland says the website is not fit for purpose.

Social Democrats co-leader, Catherine Murphy TD, said she will be writing to the Public Accounts Committee to ask it to investigate whether the project represents value for money for the taxpayer.

The rebuild of the online jobs portal was to replace the previous version which was built over 20 years ago by FÁS, the further education and training agency that was the predecessor to the current body Solas.

The outdated original website was not capable of enabling employers to search for suitable jobseekers, it could not automatically match a candidate's CV with appropriate vacancies and it did not integrate with the department's systems.

Following a Government tender process, the €3.4m contract over five and a half years was awarded to BDO Ireland and Irish tech startup The Hire Lab.

However, the launch date of 18 July 2016 was deferred for ten days due to technical issues, leading to the absence of any service in the interim.

As a result, employers had to submit their job details to a contact centre which then uploaded them when the site eventually went live on 28 July.

But even after the initial services of the new website came online, the problems with JobsIreland.ie continued.

In a statement, the department acknowledged users experienced difficulties logging into it, there were issues with navigation, creating profiles and uploading vacancies, as well as the speed sometimes being slow.

It also admitted that the need for employers to re-register with the new site in order for it to be able to offer more complex services created difficulties.

The department said from the time of the launch until December 2016, it received 200 queries or complaints a week about the new website.

However, it said since December this had fallen to 20 a week, with eight official complaints and it said most of the problems have been fixed. 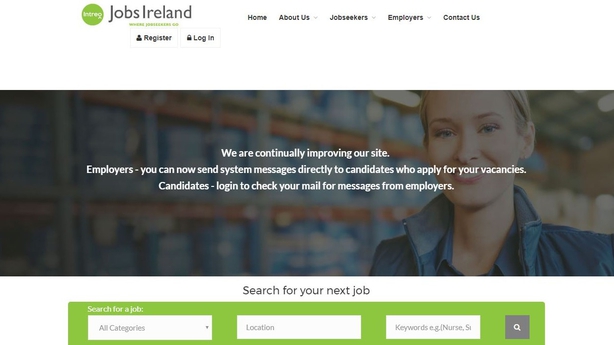 "The vast majority of the website's performance issues have now been resolved and the Department is continuing to work with the supplier to roll out small phased changes to further improve it," the department said.

However, employers in the hospitality sector took issue with this claim.

Adrian Cummins, chief executive of the Restaurants Association of Ireland, said its members continue to experience ongoing problems with the website, which he claimed is not fit for purpose.

He said members have lost faith in the service and will not return to it until the problems have been resolved.

The issues are happening at a time when there is a severe skills shortage in the catering trade, he added.

Ms Murphy questioned whether there was even a need for such a taxpayer funded website when there are a number of other private sector websites and agencies offering similar services.

She said the value of the contract seemed to be enormous and two years on it was not justifiable for those involved to talk about teething problems.

The Department of Social Protection said the contractors had assigned considerable additional staff to the project at no extra cost to the State in an effort to speed up the resolution of the glitches.

It also said it was satisfied that the contract, awarded on the basis of the most economically advantageous tender, represented the best value for money.

It said the implementation of a complex new website in a live environment would inevitably lead to some disruption.

It added that because some of the deadlines had been missed by BDO and The Hire Lab the scheduled fixed-fee delivery milestone payments were not made.

Fees were also withheld as a result of the service issues with the new website.

Nearly €1.2 million has so far been paid over.

BDO Ireland declined to comment saying it could not do so as the contract was ongoing.