The Minister of State with special responsibility for older people has said the latest census figures will lead to increased demands on the health service.

The average age of the Republic's population rose by 16 months to 37.4 years between 2011 and last year's census.

Speaking on RTÉ's Six One News, Jim Daly said the Government will have to consider the possibility of older people paying a contribution for home-help should they want to stay in their own home rather than a nursing home, but he said "we haven't any decisions made on it".

He said if a type of Fair Deal scheme was introduced for people to be cared for within their communities, it would not amount to the same amount of money required for a full-care package in a nursing home.

Mr Daly also indicated that he would like to get rid of the retirement age of 65.

The latest Central Statistics Office analysis of the returns shows that the group aged 65 and over grew by almost one-fifth, 19.1%, over the same period, making it the fastest-growing sector.

However, there was a decline of 7% in the number of pre-school children and of adults aged under 24.

Other highlights of the latest in-depth analysis of the census data show that the population has been getting steadily older since the 1980s. 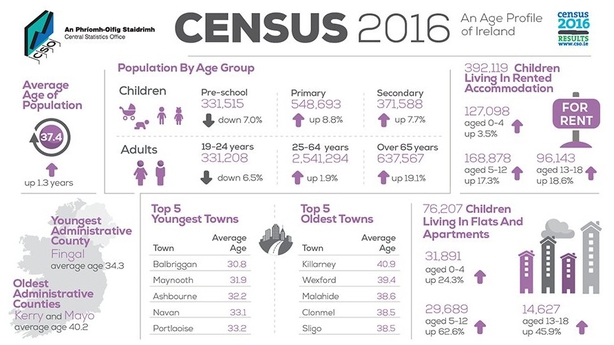 Headline findings for other groups

In a sign of rapid changes in housing, there was an increase of almost a quarter, 24.3%, in  the number of under-fours living in flats or apartments.

In a statement Deirdre Cullen, CSO Senior Statistician, said: "This profile report examines the age breakdown of Ireland's population and the characteristics of different age groups by geographic area, accommodation and household composition.

"It aims to build on the earlier results on age and sex composition in the Summary Results Part 1 and to provide a more in-depth look at all age cohorts in Ireland in April 2016."

The full report "Census of Population 2016 - Profile 3 An Age Profile of Ireland" is available on the CSO website.