President Michael D Higgins has raised the prospect of Pope Francis visiting Northern Ireland when he visits Dublin next year.

The President held a 15-minute audience with Pope Francis in the Papal Library in the Vatican this morning, followed by an hour-long meeting with Secretary of State of the Vatican Cardinal Pietro Parolin.

Speaking to reporters the meetings, President Higgins said: "There is agreement that circumstances have changed and that there is a better prospect and more scope" for a visit to Northern Ireland.

Pope Francis has promised to visit Ireland for the World Meeting of Families in August 2018. 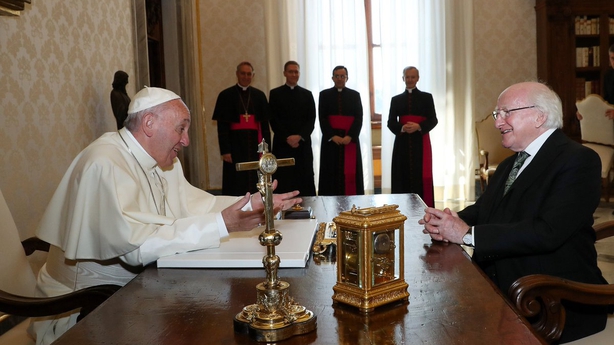 Mr Higgins said: "Particularly in the conversation with Cardinal Parolin more, we had an opportunity, and a longer meeting, of discussing the changed circumstances of the last papal visit and the different circumstances now.

"I have to say as well that in all of that, in that second longer meeting, we were able to discuss specifically the importance of the Brexit negotiations in relation to the peace process", he said.

According to a statement the President and the Pope discussed migration, climate change, global poverty and the forthcoming Brexit negotiations.

The President has long admired what he sees as Pope Francis's leadership on the most pressing issues of our times, migration, poverty, conflict and global responsibility.

He was greeted by the Pope in the Sala del Tronetta before he was led into the Papal Library for the private audience.

The conversation covered a broad range of topics at the heart of which both men agreed there should be, what the President has termed, a new connection between ethics, the economy and the environment.

They also agreed that there could be no resolution to the most serious issues without an alternative to what the Pontiff has called the globalisation of indifference.

According to the statement issued by the President's office, both men called for a sense of urgency in confronting global challenges ahead of the G7 summit of world leaders in Sicily later this week.

The President and his wife presented the Pontiff with a Climate Bell designed by the Irish artist Vivienne Roche.

It is the fifth in a series of works inspired by President Higgins' address to the Summit of Conscience for Climate in Paris in 2015 when he called for global citizens, and not just governments and NGOs, to take action to reach the ambitious agreement needed by mankind. 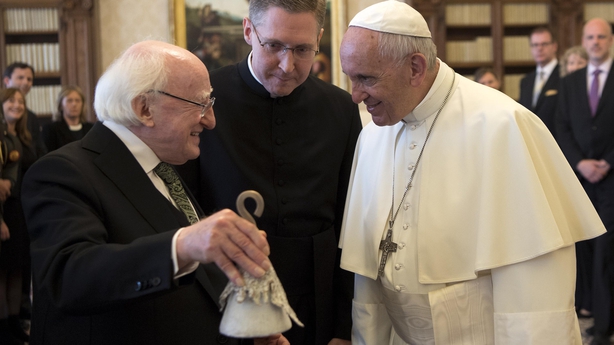 In turn Pope Francis presented medallions with an inscription of Isaiah, in which the Old Testament prophet refers to the desert becoming a fertile field, and the field then becoming a forest.

The President will later meet Irish clergy and lay staff working in the Vatican.

He will also attend a reception at the Irish College in Rome. 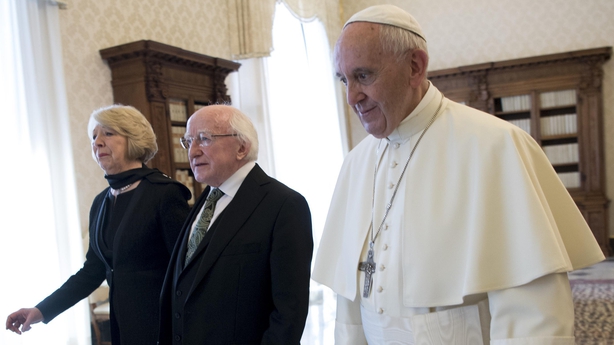 President Higgins first met Pope Francis in 2013, but he has long admired the Pontiff's pronouncements on global issues.

The President has quoted Pope Francis in at least six key speeches in the past three years, referring on a number of occasions to the Pope's phrase "the globalisation of indifference", which the Pontiff used when referring to the refugee crisis in Europe.

The President has described the Pope as a figure of benevolence, great eloquence and outstanding diplomatic skill, and he has particularly highlighted the Pope's role in the rapprochement between the United States and Cuba.

Pope to top up College of Cardinals

President Higgins' meeting with Pope Francis took place a day after the pontiff announced he is to top up the College of Cardinals with five appointees, none of whom is based in the traditional ecclesiastical power-centres of Italy and the Vatican.

The five, who will be elevated to the rank of cardinal in a month's time, will join the elite group of 120 churchmen who can enter a conclave to choose Pope Francis' successor.

He also announced that the ceremony to elevate them, known as a consistory of the College of Cardinals, would take place in the Vatican on 28 June.

The fact that none of the five are Italian or Vatican-based officials underscores Francis' conviction that the Roman Catholic Church is a global institution that should become increasingly less Italian-centric.

Naming new cardinals is one of the most significant powers of the papacy, allowing a pontiff to put his stamp on the future of the 1.2 billion-member organization.