A candlelit vigil has taken place outside Leinster House to highlight the plight of Ibrahim Halawa.

Supporters, some holding "Free Ibrahim" placards, handed a petition to Government calling on the 21-year-old to be released immediately.

Among those in attendance were Ibrahim Halawa's three sisters, Fatima, Somaia and Omaima.

Minister for Children Katherine Zappone accepted the petition on behalf of the Government. 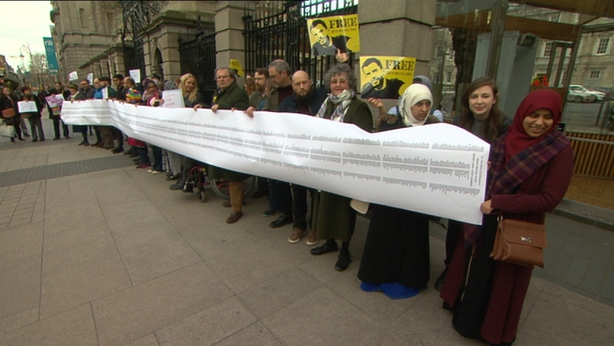 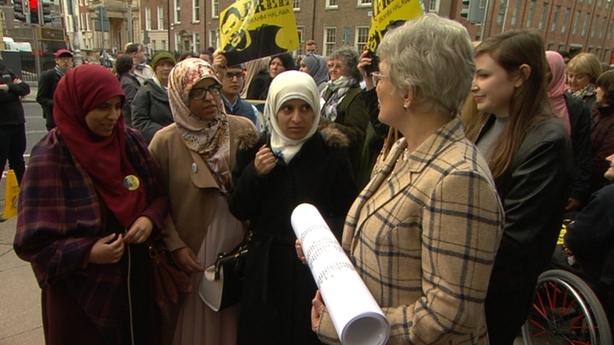 Fatima said they hope a trial will go ahead tomorrow however last month his trial was postponed for the 20th time.

They believe, however, that their brother should be released on health grounds.

Somaia said her brother remains in a very serious condition, adding that she hopes Ibrahim is "saved before it's too late".

In the Dáil earlier, Taoiseach Enda Kenny said he had written to the Egyptian president requesting the release of Mr Halawa on humanitarian grounds.

Mr Kenny was responding to Richard Boyd-Barrett of Solidarity/People Before Profit and Fianna Fáil’s Dara O'Brien who expressed concern in the Dáil over Mr Halawa's health.

Mr Halawa has been detained by Egyptian authorities in Cairo since he was arrested at a protest in August 2013.

According to Mr Halawa’s family, he is in poor health and on hunger strike.

Speaking in the Dáil, Mr Kenny said an Irish doctor visited Mr Halawa in Egypt last week and supervised a medical examination, which was conducted by an Egyptian doctor.

The Taoiseach said it was not appropriate to comment on his condition as medical records were confidential.

However, he said the doctor recommended that a special medical evaluation take place and that Mr Halawa returns to Ireland on humanitarian grounds for that assessment.

He pointed out that the president could only use his presidential powers of pardon after a court case takes place, which received some heckling from the Opposition benches.

"We are very concerned and it's getting the most attention of any Irish citizen abroad", Mr Kenny said.

The family have thanked those who turned out this evening.