The principal Easter Sunday State Commemoration ceremony and parade started at 10am with a reading of the 1916 Proclamation of the Irish Republic.

Hundreds of thousands of people lined the streets of Dublin for the largest public spectacle in the history of the State.

Wreath-laying ceremonies followed at Glasnevin Cemetery and at the Stonebreakers' Yard in Kilmainham Gaol.

The parade then made its way from St Stephen's Green to College Green, stopping off at Dublin Castle.

At midday, the Proclamation of the Irish Republic was read aloud at the GPO by Captain Peter Kelleher, followed by the Military Band playing Mise Éire.

Acting Taoiseach Enda Kenny told the gathered crowds the State honoured the memory of those who died in 1916 with the respect and the dignity that is their due.

The Irish flag was lowered to half mast during the event and President Michael D Higgins laid a wreath to honour all those who died.

After a minute's silence was observed, the flag was raised to full mast and the national anthem was played while the Air Corps conducted a fly past.

The parade saw 3,700 members of the Defence Forces, gardaí and the emergency services march along a 4.5km route from St Stephen's Green, past the GPO to Capel Street.

As part of the main ceremony, children representing the four provinces of Ireland laid daffodils under the portico of the GPO as a lone piper played Down By The Salley Gardens.

President Higgins lays a wreath outside the GPO as part of the Easter Rising commemorations #rte1916https://t.co/0x4jnf2zsv

Fr Seamus Madigan, head chaplain of Defence Forces, said the flower-laying was a "symbol of the unshakeable resolve to live together on this island in peace and harmony".

Over 1,100 voices from 31 choirs and 18 counties from Cork to Donegal joined the RTÉ National Symphony Orchestra and conductor David Brophy in the performance.

The concert was presented by Miriam O'Callaghan and drew thousands of people.

Earlier, organisers of today's events warned of massive demand for public transport and access to the city, but with trams not running due to a strike by Luas workers the capital faced unprecedented demand for bus, Dart and taxi use.

Iarnród Éireann said 50,000 people used their services to travel into the city centre to view the parade, with Dart and commuter trains from Maynooth and Drogheda particularly busy.

Dublin Bus said its services were very busy this morning between 8.30am and 9.30am but the extra capacity of 600 buses was well able to cope. 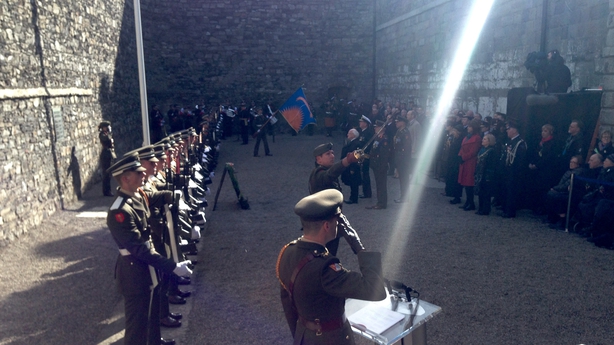 As it happened: 1916 Rising State Commemoration

Video: Archive footage of the 1916 Rising

Tomorrow, RTÉ will host a major cultural event, Reflecting the Rising, featuring exhibitions, debates, and performances throughout the city centre.

Marking Easter Monday, further commemorations are planned at each of the seven key battlefield sites in Dublin.

Wreath-laying ceremonies, again open to the public, will take place at the 1916 garrisons including Boland's Mill, the Jacob's Factory on Bishop Street, Dublin Castle and City Hall, the Four Courts, the Royal College of Surgeons, Moore Street and at St James's Hospital, which was the South Dublin Union 100 years ago.

Also tomorrow, cultural events are planned in more than 200 venues across Dublin city centre including 500 free talks, exhibitions, debates, film screenings, performances and dramatisations, with six outdoor stages and lots of activities for children and families.