Several members of the Dail's Public Accounts Committee have accused the HSE of lying and deliberately misleading the committee over contested claims the health body had apologised to a young woman who spent 13 years in a foster home despite the facility being subject to serious sex abuse allegations.

The woman is profoundly intellectually disabled and non-verbal.

Two senior TDs, including the committee chairman, said they believed the HSE mislead the committee as recently as last week, when the HSE wrote to the committee claiming to have made an apology to the woman via her representative, and to the young woman's birth mother.

The committee has been told that two officials in the HSE have now come forward to say that no apology was made.

The officials said they made this clear to senior officials in the HSE, but that the HSE ignored this and continued to claim it had apologised to the woman and her birth mother.

The apology was recommended in a report carried out by management consultant Conal Devine for the HSE, into the welfare of more than 40 children and vulnerable adults, who were placed into the foster home between 1983 and 1995.

PAC Chairman John McGuinness was critical of the HSE, following the revelation that HSE staff had undermined the claim by the senior management that an apology was made.

"There's either incompetence at play in whoever's dealing with this in the HSE or there's a deliberate attempt to mislead the committee. My view on this is that it's a mixture of both," Mr McGuiness told the committee.

"I think if you consider lying to an Oireachtas committee, to the Oireachtas, and fabricating events after the fact; if you think that's a small thing, fine - I don't believe it is. I think it's something that should have consequences," Mr Deasy told the committee. 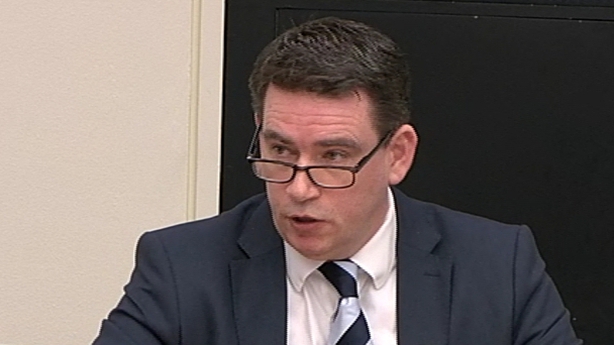 "These two individuals within the HSE who were meant to have made... those apologies, my information is they have now, in writing, contacted their bosses within the HSE to tell them that they didn't.

"The HSE ignored it and continued to actually hold the line that those apologies had been given and for me, that's inexcusable," Mr Deasy said.

He said the two HSE staff had been "used" by the HSE.

PAC member Joe Costello said he was inclined to agree with Mr Deasy's analysis of the contested claims over the apology.

"What we received at our last meeting was a very specific apology - a very specific statement that an apology had been made - it's very difficult to imagine that that was a misunderstanding," Mr Costello said.

Members of the PAC have been reacting strongly to allegations by whistle-blowers acting on behalf of the intellectually disabled woman that the HSE acted to discredit them.

The committee was discussing correspondence sent to it by the whistle-blowers, based in the South East.

Quoting directly from their letter, Fine Gael's Patrick O'Donovan said: "[The whistle-blowers were surprised by] efforts to discredit us and damage our professional reputation. The treatment of us as whistle-blowers is as despicable as it was six years ago."

He called for those responsible in the HSE to resign or be dismissed.

"This is worst element of what I've seen by virtue of the vulnerable nature of the people concerned," Mr O'Donovan said.

"But what this case really brings home to me is the absolute and total lack of any level of accountability or responsibility.

"No one has been fired. No one probably will be fired... and ultimately, the only responsibility that can be taken here is that somebody has to vacate their position.

"Somebody has to resign or be fired on the basis of what has happened here," Mr O'Donovan added.

Committee Chairman John McGuinness said: "We have to continue to remember that it is vulnerable, mentally challenged individuals that we are talking about and when you consider that, the HSE has not responded as you would expect.

"This today has shown up in full light the culture that exists in the HSE of circling the wagons and hiding behind all sorts of excuses, lies, misrepresentations and giving misleading statements.

Mr Deasy, to whom a protected disclosure was made by the whistle-blowers said that the matter was so serious, it should be raised at the highest levels of Government.

"They have done that and made it clear to their bosses that they did not and it continues to be the case that the HSE is holding the line that they did [give an apology].

"Now I think the issue for us in the Oireachtas sometimes needs to be: Who is going to protect their integrity, because the the organisation that they work for certainly seems to believe it's a cheap commodity."

He continued: "I think that there are higher powers in Government that need to take a look at this, because it kind of goes to the core of veracity within Government.

"Some people might say it's a small thing, it's a misunderstanding. I think it's way bigger than that. It's fare more weighty: It goes to the core of honesty and veracity in Government. And I think if you ignore that, well then what's the point?"

Speaking on RTÉ's Six One, Mr Deasy said: "Very clearly, we are going to give the HSE one last opportunity to clarify the issue of the apology.

"If they don't, we are going to ask very serious questions about the people who run the HSE on this particular issue."

Deputy Deasy also called on the Garda Commissioner's office to put its weight behind the investigation.