Correspondence obtained by RTÉ News has revealed that a private secretary to the Minister for Health Simon Harris wrote on 6 June to the woman whose case exposed the latest CervicalCheck crisis.

RTÉ News revealed last Thursday that around 800 women who underwent CervicalCheck screening were not issued with their results due to what the HSE said was an IT issue at a US laboratory.

The letter to 'Sharon' says that: "The Minister for Health, Simon Harris, T. D. has asked me to thank you for your correspondence concerning CervicalCheck and would like to again apologise for any distress this delay has caused you and reassure you that this is a priority for his Department and the Health Service Executive (HSE)."

The letter does not show that either the department or Minister Harris was aware of any IT issue at that point.

Last weekend, the department said that it became aware of the existence of an IT issue on 25 June through information supplied by the Health Service Executive.

Mr Harris has said the matter was first escalated to him last Wednesday evening, 10 July.

In the 6 June letter, the private secretary states: "I understand that you spoke with a colleague in the Department in recent days and intend to speak directly with CervicalCheck in relation to this issue.

"If you wish to have the Department investigate your case further, I would be grateful if you could please provide your address, date of birth, and PPS number, by return."

The letter said that officials would then engage with the National Screening Service on 'Sharon's' behalf.

'Sharon' provided the details sought the same day to the department.

A spokesperson for Minister Harris said: "The Minister's position has not changed. It was already known there was correspondence between the Department and the individual whose case highlighted the latest CervicalCheck issue. The email is part of that exchange.

"On June 6th, the Minister's office sought the individual's PPSN and other necessary details to have her case followed up. The Department then engaged with the Screening Service, which responded on June 25th.

"The Department then sought a report from the HSE on the issue, which was received on the July 10th. The Minister was made aware of the issue that evening."

CervicalCheck: Health Minister reiterates that he was told about the latest issue on the evening of 10 July https://t.co/2YxY9E8O6F pic.twitter.com/6SjJSGuTjp

Speaking on RTÉ's Six One News, Minister Harris reiterated that he was told about the latest issue with the CervicalCheck screening programme on the evening of the 10 July.

Mr Harris said that he has been "working hard" with the HSE to establish the clinical status and well-being of the women affected.

He said that for the "vast majority" of women there was no change to their test results.

Mr Harris added that there was a change to the test results of 52 women and their GPs were informed of this in February.

Minister Harris said that correspondence received last month did not refer to an IT glitch with the CervicalCheck programme.

He said the query, from a woman identified as 'Sharon', was asking where her smear result was and it was acted on "entirely appropriately" by the Department of Health.

He said that his department acted on the correspondence and was told of the glitch by the HSE on 25 June.

The Wicklow TD said the department then asked what the extent of the IT glitch was and received a report on 10 July.

Mr Harris added that he accepts the issue is "has been a cause of great frustration" but said it is important to recognise is that most of the tests involved saw no change.

He also said he is "not satisfied" that patient representatives on the CervicalCheck steering committee were treated fairly in this case.

This evening, Labour Party Health Spokesperson Alan Kelly said "there's so many questions that need to be answered".

He said: "Most importantly tonight, by the Nine O'Clock News, I want to see the chief clinical officer come on and give a clinical assurance to the women of Ireland, particularly the 52 women who have now tested positive following a retest of their smears for HPV.

"We need a clinical assurance in relation to these women that the delay didn’t have an impact on their outcomes. And we also need a full clinical statement on what’s happened here. I want to see that by the Nine O’Clock News tonight.

"I also believe that the rapid review that is taking place into this whole issue needs to include the Department of Health and the minister’s own office. Currently, it doesn’t. And furthermore, I believe that the HSE cannot be allowed to investigate themselves as the current terms allow." 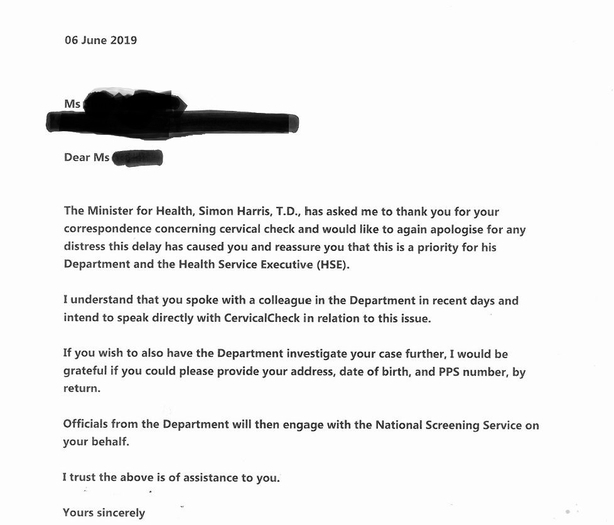 The tests involved in the case were carried out between 1 October 2018 and 25 June this year and were mainly repeat tests for human papillomavirus (HPV).

The HSE has said that a small number of tests affected by the issue have also been identified outside of this time period.

On Friday, the HSE announced an immediate review of the computer glitch.

Some of the 800 women have proven to be positive for the HPV virus on the fresh test, RTÉ News has learned.

It is understood the group affected is in the region of 50 women.

The re-test was performed on the same sample but used a more sensitive DNA check, according to the HSE.

This out of date problem test problem was made public earlier this year and women were notified at the time.

Dr Colm Henry, the chief clinical officer of the HSE, has said that the clinical risk to women at the centre of the IT glitch is low.

Of the 800 plus affected, he said that 52 women had a changed result after the re-test, and tested positive for the HPV virus.

Dr Henry said the priority now is to check with the GPs of the 52 women, to ensure their patients received the results and were sent on for further investigation if necessary.

CervicalCheck records show that half of the group of 52 women have been referred on for further investigation.

Dr Henry said that for the other women of the 800-plus group, there was no change to their result on the recheck.

He apologised for what had occurred and said that all of the GPs of the women affected by the issue will have been contacted by the end of this week, or  next week.