Up to 2,000 people have taken part in a march in Dublin against religious ownership of the new National Maternity Hospital.

The 'We Own Our Hospitals' march was organised by Parents for Choice, together with Uplift, the National Women's Council, and Justice for Magdalenes.

There has been growing opposition after it emerged the Religious Sisters of Charity will be given ownership of the €300m taxpayer-funded hospital because it owns the land on which it is to be built.

The new hospital is to be built on the campus of St Vincent's University Hospital in south Dublin. 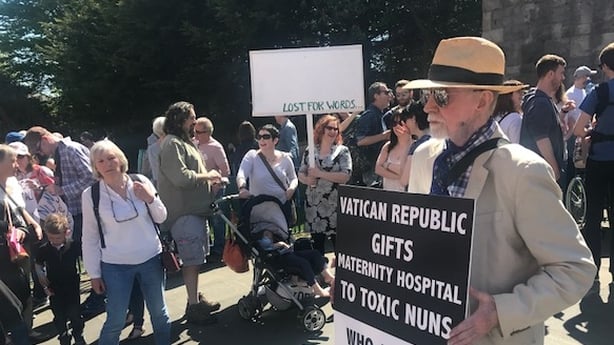 Parents for Choice spokesperson Sinead Redmond said it is a "mark of disrespect" to the survivors of homes where lone mothers were locked up "by this order of nuns in their laundries" to give the Sisters of Charity ownership of the new hospital.

Minister for Health Simon Harris has said the proposed hospital will have full clinical independence when it moves from Holles Street to the Elm Park campus next to St Vincent's Hospital.

Mr Harris has also said he intends to ensure the hospital's independence is further underpinned in legal arrangements.

And they're off... March against religious ownership of new National Maternity Hospital @rtenews pic.twitter.com/KLoOAPqfLX