Employers in Latvia are allowed to dismiss employees who refuse to get vaccinated against Covid-19, under new rules aimed at taming the pandemic in the EU member state.

Elected politicians without a vaccination certificate will also be barred from their duties - a ban that could include two parliamentarians who are refusing to get inoculated.

"We will challenge this law and the current order in the Constitutional Court," said the politicians, Aldis Gobzems and Karina Sprude, from the Law and Order party.

Unvaccinated people will also not be allowed into shopping malls whose size exceeds 1,500 square metres.

The Domina shopping mall in Riga, where the restrictions apply, appeared half-empty compared to a normal Monday.

A security guard was checking every customer coming in.

Unvaccinated employees can now be put on three months of "unpaid involuntary vacation" and then laid off with one month's salary as compensation if they still refuse to get vaccinated.

However the government said it was also ending a nightly curfew that has confined people to their homes between 8pm and 6am for the past three weeks.

"We have managed to avoid the looming catastrophe in hospitals... and we are having more success with vaccinations but the battle is far from over," Health Minister Daniels Pavluts said in a written opinion piece.

"The number of lung infection patients in Latvia's hospitals is three times higher than the health system is designed for," he said.

The latest vaccination data shows that around 60% of Latvian adults have been fully vaccinated - one of the lowest levels in the European Union.

However, the recent spike in Covid infections as well as increased hospitalisation and death rates, has led to a sharp rise in the vaccination rate in recent weeks. 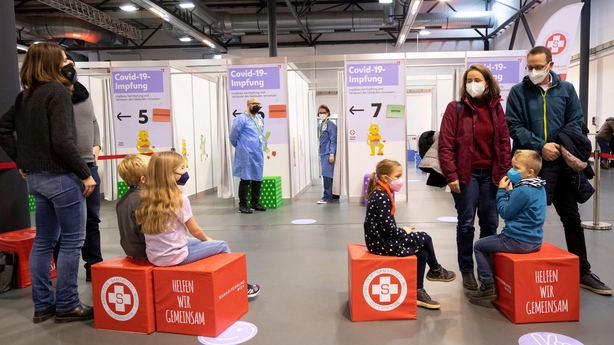 Austria has become the first EU country to impose a lockdown on the unvaccinated and the first to start inoculating children as young as five, as the virus strengthens its grip on the continent.

Surging infection rates have placed western Europe once again at the heart of the global epidemic and governments are being forced to take action.

The Netherlands has already announced the region's first partial lockdown of the winter.

Austria has inoculated about 65% of its nine million people, below the EU average of 67%.

Daily new infection rates have been hovering at around 12,000 in recent weeks, up from roughly 2,000 a day in September.

But the restrictions on the unvaccinated have caused some resentment, with hundreds gathering in Vienna yesterday to protest.

As part of efforts to increase vaccination coverage, authorities in Vienna have also become the first in the EU to start vaccinating children between the ages of five and 11.

Cartoons of ninja turtles and tigers adorned coronavirus vaccination booths to welcome children at a convention complex serving as a vaccine clinic.

One of the first into the colourful booths was eight-year-old Pia Schwarzl.

She told AFP the jab had hurt "a little" but that she was looking forward to "staying at home and playing" for the day.

Her father, 41-year-old Gerald Schwarzl, said he had decided to have Pia and her five-year-old brother Theo vaccinated so that they "don't get seriously sick".

"We believe they will be protected just like they are with other vaccinations that they've had," he said.

The city authorities said some 10,000 appointments had been made for children and they had the capacity to jab 200 youngsters a day.

The European Medicines Agency has not yet approved any of the coronavirus vaccines for the five-to-11 age bracket.

But Vienna's Mayor Michael Ludwig said the situation was "serious" and that the city had the right to pursue a more "determined path".

Austria's government hopes its measures can stem the virus and take the pressure off struggling intensive care units.

It also wants to drive up the "shamefully low" rate of fully vaccinated residents. The interior ministry has promised extra patrols to implement the lockdown.

But the measure has been widely criticised as unenforceable and unlikely on its own to reduce contacts by the amount necessary to curb the contagion.

Debates are already being aired between ministers about possible further measures, such as a night-time curfew for all.

Germany's coronavirus infection rate has risen to its highest level since the start of the pandemic, public health figures showed today, as the three parties in talks to form a new government plan an expansion of measures to tackle the pandemic.

The seven-day incidence rate - the number of people per 100,000 to be infected over the last week - rose to 303 from 289 the previous day, figures from the Robert Koch Institute showed.

The three parties in talks to form a coalition plan to tighten proposed measures to tackle the spread of the new wave of infections, Greens co-leader Robert Habeck said before their plans go to parliament on Thursday.

"We are expanding the toolbox compared to the proposals introduced in the first reading," Mr Habeck told broadcaster ARD.

The measures will include contact restrictions, an amendment seen by Reuters showed.

Hospitals in Slovakia, one of Europe's least-vaccinated nations, have been filling up with coronavirus patients, with the northeastern region of Presov reporting almost no spare intensive care beds, authorities and hospitals said.

President Zuzana Caputova has signed a law allowing the government to force unvaccinated people to test twice a week before attending work in the worst-affected regions and prevents them going to restaurants and other services.

The country of 5.5 million was not planning a national lockdown, however.

The Slovak Health Ministry said the Presov region had 96% of lung ventilator beds occupied and has had to send 35 seriously ill patients elsewhere over the past week.

"Presov region hospitals report critical situation - only 2 beds with lung ventilation are free," the ministry said in as tatement.

In neighbouring Kosice, the capital of the southeastern region, the main hospital said it was admitting 20-40 patients a day and had nearly 90% of beds full. There were only few high-flow oxygen and lung ventilators left.

"It really is serious - deciding who gets the instruments," the Luis Pasteur University Hospital Director Jan Slavik said in a statement.

The hospital said 80% of its patients were not vaccinated,and that it had only one fully vaccinated patient to date on a lung ventilator.

Slovakia has has reported more than 6,500 cases a day in the past week.

There were 2,637 people in hospitals with coronavirus, including 241 on lung ventilators. That is still below the peak of 3,800 seen in March.

Slovakia had 53.7% of adults vaccinated, according to data from the European Centre for DiseasePrevention and Control, below the EU average of 76%.