Protesters have gathered at Italian ports as the country braced for widespread disruption over new coronavirus requirements for workers.

Around 300 people blocked an entrance to the port of Genoa in the northwest, causing delays in what was feared to be the start of a day of blockades and demonstrations.

Hundreds also demonstrated at the port of Trieste, a major hub in the northeast, but regional chief Massimiliano Fedriga insisted "the port is working".

From today, all workers must show a so-called Green Pass offering proof of vaccination, recent recovery from Covid-19 or a negative test - or face being declared absent without pay. 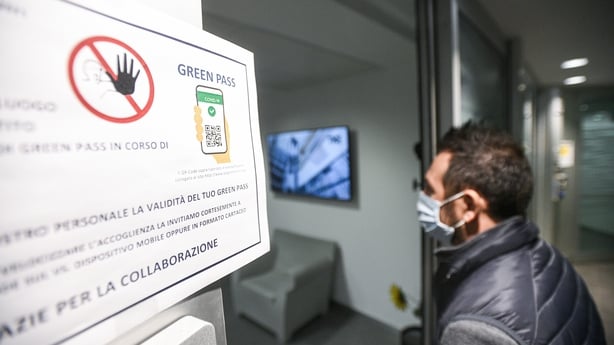 More than 86% of Italians over the age of 12 have received at least one jab, and automatically qualify for the certification.

But up to three million workers are estimated to be unvaccinated - and most will only be able to work if they pay for their own tests either every 48 or 72 hours, depending on the type.

Ivano Russo, director general of trade group Confetra, said that out of a total of 900,000 truck drivers, couriers and warehouse staff employed by members of his lobby, "25-30%t" do not have Covid certificates.

Dock workers in Trieste have threatened to go on strike indefinitely, despite being offered free Covid tests.

In Genoa, the small blockade was peaceful early today, although some truck drivers reported delays.

"I have to unload, I have to be able to work. I took the vaccine to get the Green Pass because I have to work." 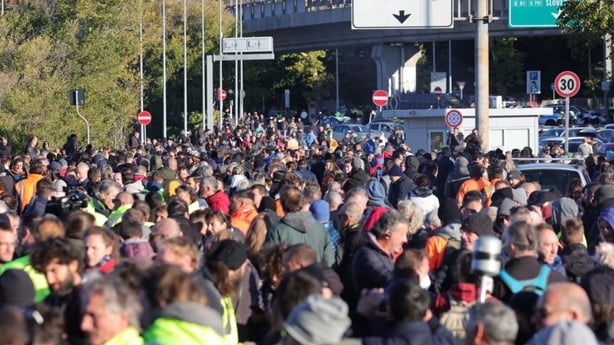 More than 560,000 Green Passes were downloaded on Wednesday, according to government data, suggesting that the advent of the new rules was boosting vaccinations.

Prime Minister Mario Draghi's government has defended the Green Pass as a way of avoiding further lockdowns in Italy, where the economy is expected to record almost 6% growth this year after a devastating Covid-induced recession.

Ministers looked unlikely to give in to calls for free Covid tests for all, but the ANSA news agency reported that they were considering larger tax breaks for firms that pay for them.

Anti-pass protests were expected across the country today but the government hopes to avoid a repeat of demonstrations in Rome last weekend that degenerated into violent clashes inflamed by far-right militants.