Bosnia risks "severe consequences" to its reputation if assistance is not urgently given to 1,700 people left without shelter for more than three weeks, the European Union's foreign policy chief has warned.

Authorities in the non-EU country need to "quickly scale up their actions to address the grave humanitarian situation," the EU's Josep Borrell told the Serb member of Bosnia's joint presidency, Milorad Dodik, in a phone call, Mr Borrell's spokesman said.

Those authorities should "take full responsibility, urgent action and do what it takes to provide immediate assistance and work on longer term solutions," Mr Borrell told Mr Dodik.

The blunt words reflected frustration over the slow and minimal action taken so far to help the migrants despite repeated urgings from Brussels and €3.5 million in extra aid for the emergency.

Most of the migrants are from Pakistan and Afghanistan and they include children.

Their original camp, located in the Una Sana area near the border with EU member Croatia, burned down on 23 December.

The Bosnian army has started to put around half the migrants in some 20 tents fitted with heating set up next to the burnt-out camp, with aid groups supplying clothes, blankets and food.

The other half remain sleeping rough in a nearby forest, waiting for a solution. 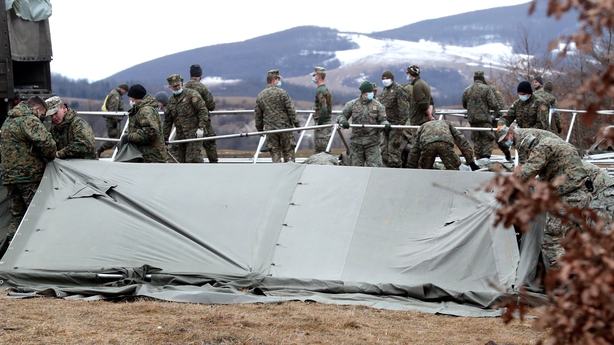 Local authorities, however, are refusing to see the camp rebuilt and are resisting entreaties from the UN's International Organization for Migration for an abandoned factory to be used.

The federal government is not forcing the issue.

The Serb part of the country, represented by Mr Dodik, refuses to see any migrant camps on its territory, all of which are found in the Bosnian-Croat part.

In his call to Mr Dodik, Mr Borrell noted that the EU had "repeatedly urged" Bosnia's authorities to "provide basic and secure living conditions to all the persons of concern still sleeping out in the cold in extreme conditions".

He stressed the total €88m in EU aid for migration assistance the country has received, and called for "sustainable solutions, notably with the opening of centres more evenly distributed across the full territory of the country".

"Failing to do so would have severe consequences for the reputation of Bosnia and Herzegovina," Mr Borrell said, according to his spokesman.