Polish police have said they have detained 48 people after protesters tried to stop them arresting an LGBT activist accused of hanging rainbow flags over statues in Warsaw and damaging a pro-life campaigner's van.

Crowds of protesters shouting "Shame, disgrace!" surrounded a police vehicle in the centre of the capital yesterday to try and stop it driving away with the activist inside.

A court ordered that the activist be detained for two months.

Members of the anti-homophobia group "Stop Bzdurom" have said they hung flags on statues of Jesus and other figures last week as part of a fight for LGBT rights, an issue thrust into the heart of public debate in Poland during last month's presidential election.

The ruling nationalist Law and Justice (PiS) party says LGBT rights are part of what it calls an invasive foreign ideology that undermines Polish values and the traditional family. 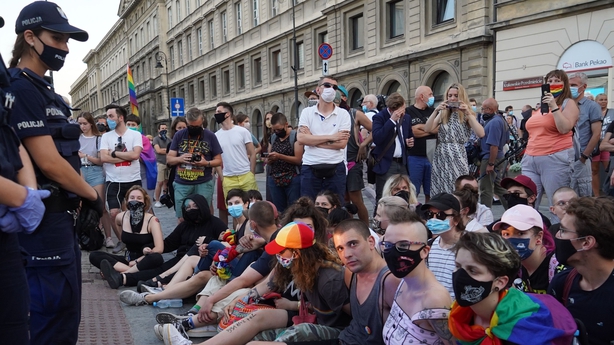 "Tomorrow this knife that was used to cut the car and tyres (of the pro-life campaigner) will be used to stab people just because we don't like their opinions," Mr Ziobro told a news conference.

The commissioner for human rights at the Council of Europe ,a rights watchdog, called for the immediate release of the activist.

"Order to detain her for 2 months sends very chilling signal for freedom of speech and LGBT rights in Poland," Commissioner Dunja Mijatovic tweeted.

Stop Bzdurom and other groups have called for a protest in Warsaw in solidarity with LGBT people.