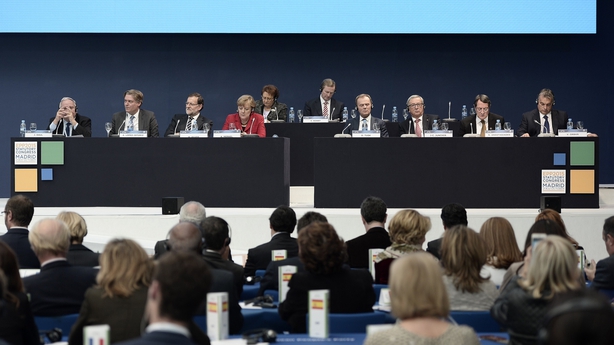 The main conservative group in the European Parliament will remain the largest bloc after the elections, but has lost ground and will not wield a majority in coalition with its centre-left ally.

The EPP won 178 seats, down sharply from 216 in the outgoing parliament but just ahead of the 152 won by traditional centre-left rival the Socialists and Democrats

The two mainstream parties between them will no longer have a majority and will have to reach out to liberals if they plan to maintain a "cordon sanitaire" and exclude the far-right from decision making.

"We won the election and the EPP 'spitzenkandidat' Manfred Weber will be president of the European Commission," Joseph Daul told reporters, after a vote projection gave the group the most seats.

"I don't feel a real powerful victory today," said Manfred Weber, the EPP leader in the 751-seat parliament and candidate to become the new head of the European Commission, the EU executive.

"We are facing a shrinking centre," Weber told journalists, referring to the loss of seats from his group and the Socialists.

Under the projection - which could still shift as results come in - the liberal ALDE group, now joined by French President Emmanuel Macron's Renaissance movement, could increase its seats from 69 to 102.

The three mainstream parties would thus have a majority in the 751-seat assembly, but only if they can agree a common programme and not fall out over nominations to the European Union's most powerful posts.

The main Greens bloc could increase its contingent from 52 to 71, but the main winners from the fall in centrist support could yet be a loose alliance of nationalist and right-wing populists.

With a double-digit score across Europe's biggest countries including a stunning 20% in Germany, the Greens bagged record gains in European elections today with younger voters leading calls for action to halt global warming.

The environmental party was on course to double their score in Germany from the last EU elections in 2014, knocking the Social Democrats off their traditional second place.

Likewise in Austria, Ireland and the Netherlands, the environmental party were on course to garner more than 10%.

With the two main traditional EU blocs - the conservative EPP and the centre-left Social Democrats projected to lose ground, the Greens could end up as kingmaker in the European Parliament.

Spain's acting Prime Minister Pedro Sanchez was the big winner of European elections today with his ruling Socialists coming first, a result he will likely use to wield more influence in the EU.

With more than 85% of votes counted, government spokeswoman Isabel Celaa announced the Socialist Party had come first with close to 33%, followed by the conservative Popular Party which won just over 20%.

Mr Sanchez has emerged as the big hope for European social democrats, the second largest bloc in the European parliament.

Catalonia's former separatist president Carles Puigdemont, who fled Spain in 2017 after a failed secession bid, and his ex-deputy Oriol Junqueras, currently in jail, were also elected.

It is unclear however whether both will be able to take their seats as MEPs.

Marine Le Pen's far-right Rassemblement National party won the most votes in the European Parliament election in France, two exit polls have shown, in an upset to the domestic and European ambitions of President Emmanuel Macron.

The IFOP poll showed the RN winning 24% of the vote compared with 22.5 for Macron's centrist party.

An Elabe poll showed similar figures and forecast they would leave Le Pen's party with 24 seats in the European Parliament compared with 23 seats for Macron's party.

"The gains for our allies in Europe and the emergence of new forces across the continent... open the way for the formation of a powerful group in the European parliament," the lead campaigner for National Rally, Jordan Bardella, told supporters.

Three exit polls showed the French greens - officially known as the European Ecologists and the Greens -- placing third behind the far-right and President Emmanuel Macron's centrist party, winning about 13% of the vote.

In Germany, Chancellor Angela Merkel's centre-right bloc was leading in European elections, exit polls showed today, but the score was shaping out to be a historic low, while the Greens recorded a surge.

Ms Merkel's Christian Democratic Party and allies Christian Social Union were set to garner around 28%, two separate polls by national broadcasters ARD and ZDF showed, sharply under their 35.3% in 2014.

Her coalition partner SPD was also headed for its poorest showing in an EU poll with 15.5%, as the centre-left party was knocked from second position by the Greens, which surged to between 20.5 and 22%.

Latest surveys have suggested that the climate crisis has overtaken immigration as the main worry.

Illustrating the shift, the Greens were forecast to be heading for an all-time high score which is double that of their 2014 showing.

"It's the first time that climate change has played such a role in an election," said Greens chief Robert Habeck.

Ska Keller, who was leading the Greens' list, pledged that "we must now implement (our proposals) on climate change".

The exit polls gave New Democracy 33.5% compared to up to 25% for Syriza, according to the exit poll by the five main private TV stations.

The socialist Kinal party came third at 7.7%, followed by the Communist KKE party at 5.5%, according to the voter survey.

Greece's neo-Nazi party Golden Dawn fell to an estimated 4.5% - nearly five points short of its previous showing in 2014 - with a new nationalist party, Greek Solution, making gains at their expense.

In Poland, the governing right-wing Law and Justice party (PiS) won the elections to the European Parliament outpacing a coalition of opposition liberal parties, according to an exit poll.

The PiS took 42.4% of the vote for 24 of Poland's 51 seats in the EU parliament compared with 39.1% and 22 seats for the liberal European Coalition, according to the IPSOS pollsters.

In Italy, the far-right League party of Interior Minister Matteo Salvini won the most votes in Sunday's European elections in Italy with 27-31 percent, according to exit polls. 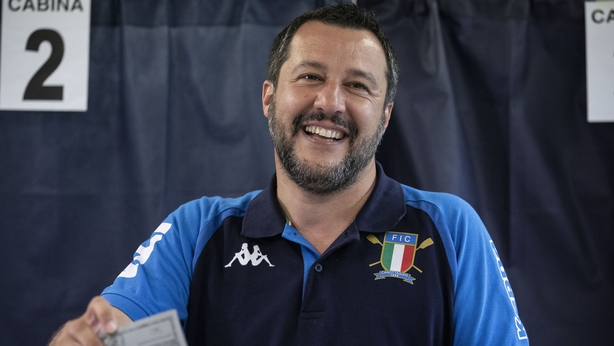 Its coalition partner the anti-establishment Five Star Movement (M5S) was beaten by the centre-left Democratic Party (PD) which came second with 21-25%, exit polls showed after voting ended at 2100 GMT.

"The League has probably become the top party in Italy," the head of the party's Senate grouping Riccardo Molinari said after the exit polls were released.

The result for the anti-migrant League was not as high as some had predicted but appeared to confirm the party's stellar rise since forming a government in June last year.

Some analysts predicted that Salvini would want to call snap elections if the League obtained a high score, although he has denied this during campaigning.

"As far as I'm concerned, if the League wins nothing changes in Italy, everything will change in Europe, starting from tomorrow," Salvini said on Sunday before exit polls were released.

Dutch far-right leader Geert Wilders looked set Sunday to be kicked out of the European Parliament as results confirmed a win for the social democrats.

Wilders' anti-Islam, eurosceptic Freedom Party currently has four MEPs but is on course to win none this time around, according to the tally by the ANP news agency with 98 percent of votes counted.

Exit polls on Thursday, when the Netherlands was the first country to vote, along with Britain, suggested that Wilders' party would keep one seat.

After an energetic campaign by Frans Timmermans, a contender to lead the European Commission, Dutch social democrats are set to win six of the Netherlands 26 seats, ANP said.

Prime Minister Mark Rutte's VVD Liberal party is set to win four seats, as are the Dutch Christian Democrats.
Populist, anti-EU leader Thierry Baudet, whose Forum for Democracy party was formed only two years ago but has since taken votes from Wilders, is expected to win three seats, less than expected in opinion polls.

Riding the "green wave" seen across the EU, the GroenLinks (Green-Left) environmental party is also expected to get three MEPs.

The centre-right National Liberal Party (PNL) and the centrist USR-PLUS alliance together racked up almost 50% of the vote, according to the poll carried out by the CURS-Avangarde institute.

The PSD has been dogged by controversy over its proposed justice reforms, which both the opposition and Brussels say will weaken the fight against corruption in Romania.

In the European elections, the party, which is an ally of French far-right leader Marine Le Pen's National Rally, could end up with two MEPs.

At national level, the vote sets the stage for difficult negotiations to form a government, five months after the ruling coalition collapsed and left Prime Minister Charles Michel in charge of a caretaker administration with no majority.

With 40% of the votes counted in all three elections in the Dutch-speaking Flanders region, Vlaams Belang (Flemish Interest) was on course for 18%, around three times their score in the last elections in 2014.

If confirmed by final results "this shows that Belgium is not spared by the result of extremist populism," Mr Michel told RTBF.

The Fidesz party of Hungary's nationalist Prime Minister Viktor Orban is set to win a huge victory in the European parliament elections, according to an opinion poll conducted on Sunday.

The poll gave Fidesz 56% of the vote with two left-wing opposition parties, the Socialists (MSZP) and the Democratic Coalition (DK), trailing far behind on 10% apiece.

The far-right Jobbik party is down from 15% to nine, while the small liberal Momentum party looks likely to break into the European parliament for the first time with 7%.

The vote for the Green LMP party fell from 5% to 3% and is not expected to win any seats.

If borne out, the result could equal Fidesz's previous record in the 2009 European elections, where it also scored 56%.

Meanwhile, the centre-right People's Party of Austrian Chancellor Sebastian Kurz looks to be on course for gains in the European parliament elections, with the far-right Freedom Party coming third, according to a media forecast published as polls closed in Austria.

However, pollsters cautioned that predicting results has been made more difficult by the fact that the vote comes only days after the so-called "Ibiza-gate" corruption scandal.

Slovakia's outgoing centrist president hailed the victory of liberal parties linked to his successor in elections to the European Parliament today, signalling a second-spot defeat for the governing populist-left Smer-SD.

Andrej Kiska also expressed his "regret that the advance of extremist forces has been confirmed", in an apparent reference to a third place finish for the far-right LSNS party, according to an unofficial tally published by two major Slovak dailies.

Top circulation Dennik N and Hospodarske Noviny ran unofficial tallies showing the coalition of Progressive Slovakia and Together parties winning 20.1% of the vote.

The ruling populist-left Smer-SD took 15.7% and the far-right LSNS of Marian Kotleba, often identified as neo-fascist, scored 12.1% and its first two seats in the EU parliament, according to the same tallies.