French President Emmanuel Macron has ordered his prime minister to hold talks with political leaders and demonstrators, as he sought a way out of nationwide protests after rioters turned central Paris into a battle zone.

Government spokesman Benjamin Griveaux had indicated the Macron administration was considering imposing a state of emergency.

Yesterday, riot police were overwhelmed as protesters ran amok in Paris's wealthiest neighbourhoods, torching dozens of cars, looting boutiques and smashing up luxury private homes and cafes in the worst disturbances the capital has seen since 1968.

Mr Macron met with the prime minister, interior minister and top security service officials at the presidential palace in Paris today after flying in from the G20 summit in Argentina. 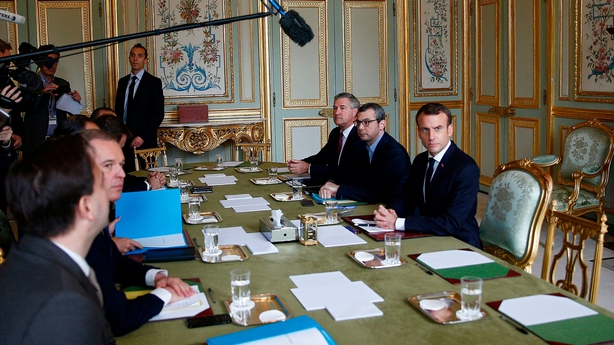 The unrest began as a backlash against fuel tax hikes but has spread. It poses the most formidable challenge yet to Mr Macron's presidency, with the escalating violence and depth of public anger against his economic reforms catching the 40-year-old leader off-guard and battling to regain control.

After a meeting with members of his government today, the French presidency said in a statement that the president had asked his interior minister to prepare security forces for future protests and his prime minister to hold talks with political party leaders and representatives of the protesters.

A French presidential source said Mr Macron would not speak to the nation today despite calls for him to offer immediate concessions to demonstrators, and said the idea of imposing a state of emergency had not been discussed. 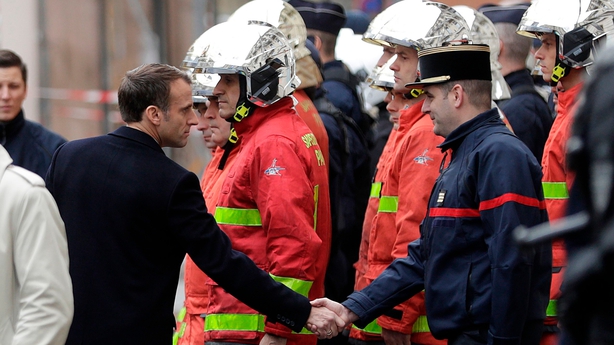 Arriving back from the G20 summit in Argentina, Mr Macron had earlier rushed to the Arc de Triomphe, a revered monument and epicentre of yesterday's clashes, where protesters had scrawled "Macron resign" and "The yellow vests will triumph".

He paid tribute to the police but was also booed by sections of the crowd.

The "yellow vest" rebellion erupted out of nowhere on 17 November, with protesters blocking roads across France and impeding access to some shopping centres, fuel depots and airports.

Violent groups from the far right and far left as well as youths from the suburbs infiltrated yesterday's protests, the authorities said.

Paris police said 412 people were arrested yesterday during the clashes and 378 were still in custody.

A total of 133 had been injured, including 23 members of the security forces who battled rioters for most of the day in some of the most famous parts of the capital.

As protests took place across the country, a motorist died overnight after crashing a van into traffic which had built up due to a "yellow vest" demonstration in Arles, southern France, a local prosecutor said.

In a fresh incident this morning, a motorway pay booth was set on fire in southern France near the city of Narbonne, a judicial source said.

The main north-south motorway in eastern France, the A6, was also blocked by protesters near the city of Lyon this morning, its operator said.

The capital was calm, however, but as groups of workers moved around cleaning up the mess from the previous day, the scale of the destruction became clear.

In areas around the Champs-Élysées, the Louvre palace, the Opera or Place Vendome, smashed shop windows, broken glass and the occasional burned out car were testament to the violence.

Dozens of cars were torched by the gangs of rioters, some of whom wore gas masks and ski goggles to lessen the effects of tear gas which was fired continually by police.

One person was in a critical condition after protesters pulled down one of the huge iron gates of the Tuileries garden facing the Louvre museum, crushing several people.

Nearly 190 fires were put out and six buildings were set alight, the interior ministry said. 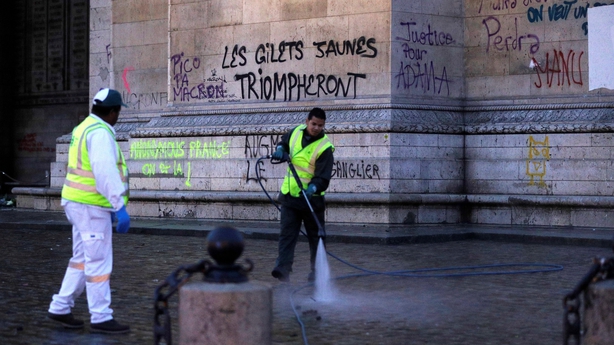 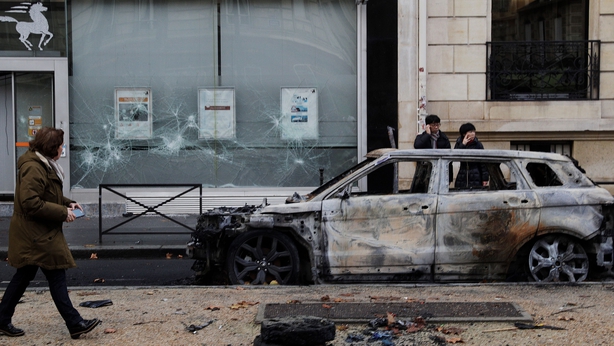 Mr Macron faces a dilemma in how to respond to the "yellow vests", not least because they are a grassroots movement with no formal leaders and a wide range of demands.

Some representatives have also insisted on public talks broadcast on TV.

"We have said that we won't change course. Because the course is good," government spokesman Benjamin Griveaux told BFM television defiantly on this morning.

"It has been 30 years that people change course every 18 months," he added, referring to Mr Macron's presidential predecessors who have often caved in to pressure from French street protests. 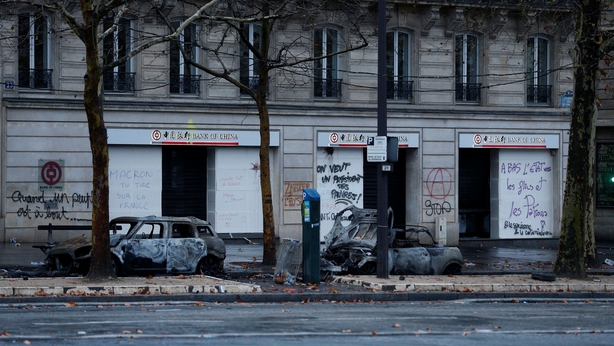 Mr Macron has so far refused to roll back taxes on fuel, which he says are needed to fund the country's transition to a low-emission economy.

He remains a fervent defender of the tax cuts he has delivered for businesses and high-earners, which he believes were necessary to lower the country's chronic high unemployment.

"We're at a time when a bit of national unity around our security forces, around those who are really struggling would be a good thing for the country," Mr Griveaux added.

An estimated 75,000 demonstrators, most of them peaceful, were counted across France yesterday, the interior ministry said.

The number was well below the first day of protests on 17 November, which attracted around 282,000 people, and also down from the 106,000 who turned out last Saturday.

He did not rule out imposing a state of emergency - a demand made by the police union Alliance - declaring: "Nothing is taboo for me. I am prepared to examine everything."

Two people have died and dozens have been injured in the rallies, which opinion polls suggest still attract the support of two out of three French people.