Romanians have taken to the streets over the weekend demanding the resignation of the government, which they accuse of corruption and abuse of power.

The demonstrations in the capital, Bucharest, and other major cities began on Friday and have largely been peaceful.

However on Friday riot police fired tear gas and used water canon on one rally in central Bucharest.

Hundreds of people, including many Romanians who work in western Europe, and police officers needed medical attention.

About 40,000 people gathered in front of government offices in the capital yesterday evening - fewer than the 100,000 the previous night - shouting "Resignation!, Resignation!", blowing vuvuzelas and waving Romanian and European Union flags. 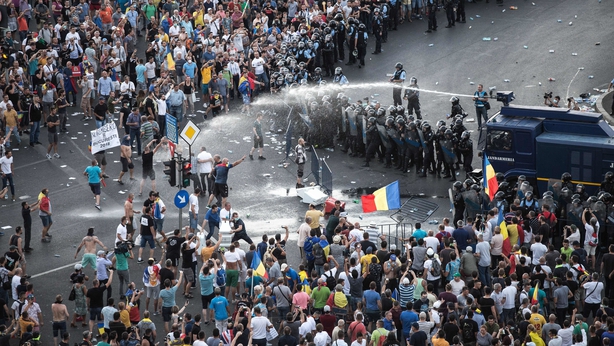 Romania, a country of 20 million, remains among the poorest and most corrupt members of the EU.

Several more thousands protesting against graft and politicians' attempts to decriminalise several corruption offences gathered in the Transylvanian cities of Cluj, Sibiu and Brasov, in Timisoara on the border with Serbia, and in the eastern city of Iasi.

Peaceful rallies have repeatedly been held since the Social Democrats took power in early 2017 and tried to decriminalise several graft offences.

Earlier this year, ruling party legislators pushed changes to the criminal code through parliament, drawing expressions of concern from the European Commission and the US State Department.

The changes are being challenged in the Constitutional Court.

Social Democrat chief and lower house speaker Liviu Dragnea was sentenced to three and a half years in prison by the Supreme Court in June for incitement to abuse of office, a ruling which is not final pending an appeal.

In an open letter, Mr Dragnea, who is seen as de facto head of the government, said his party and government would not bow to public pressure to resign.

"I want to assure all Romanians that parliament will not allow anybody to dissolve democracy, suspend individual rights and freedoms, change the outcome of the elections and overthrow order in the Romanian state through violence," he wrote.