Thirteen people were killed yesterday afternoon when a van mounted a pedestrian walkway running down Las Ramblas, mowing down crowds.

"It was practically bound to happen over here, especially after what happened in Nice," said Gabriel Rabarte, 50, a security guard at a shopping centre just off the Ramblas.

"They should have put some (bollards) there, or something."

Residents and workers said they had long feared the area could be a target for attacks and questioned why authorities in the city and police had not permanently installed bollards or barriers.

Others said authorities had to balance security needs with protecting tourism - a sector sensitive to an overly visible police presence - and preserving the life-style of residents.

Barcelona's city authorities said extra police had already been deployed to Las Ramblas before yesterday’s attacks and security was constantly under review.

Gally Battat, 24, an American who lives near the area and was a few streets away from where the attack took place, said he had last week noticed that there were no bollards on Las Ramblas and other areas that would be likely targets for a car attack.

Spanish authorities have previously placed concrete blocks to secure vulnerable areas, and Barcelona had temporarily taken such steps in some central avenues during New Year celebrations.

The city had also banned large trucks from accessing central areas in that period, as had Madrid. 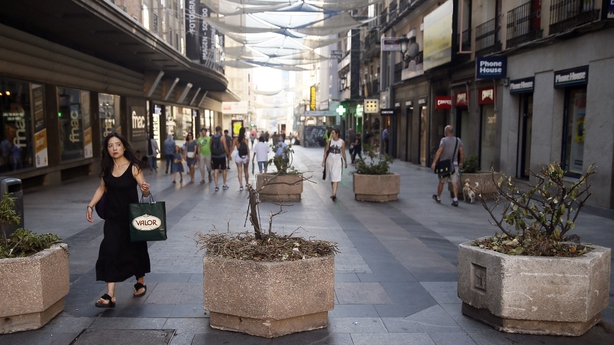 In the French city of Nice, scene of a deadly truck attack on Bastille Day last year, the mayor said he would convene a meeting of his European counterparts next month to see how they can improve security following the Barcelona attack.

"It's obvious that it is the mayors - be it in Berlin, London, Paris, Nice, Barcelona or Stockholm - who are the first to be confronted with this violence and who manage these public areas," Christian Estrosi told reporters.

Jose Moya, who has worked as a florist on Las Ramblas in Barcelona for the past 30 years and whose stall narrowly escaped being hit by the van in the attack, said today he wished police had put more thought into how to protect the area.

We have always said Las Ramblas is an easy target

"What happened is an atrocity. I'm not saying it's the police's fault ... (but) I don't know, maybe you can't put in bollards, but if we're on high alert, you could have police vans stationed there blocking the way. It would have saved lives."

However, authorities in Catalonia said attacks like yesterday’s were hard to prevent.

"Absolute security is impossible, it would mean giving up our freedom and shuttering ourselves up in our homes," Barcelona's mayor, Ada Colau, told Catalan television.

"I understand the debate, but this is not practical ... we can't fill up Barcelona with bollards," Joaquim Forn, who runs home affairs in Catalonia, told Spanish radio.

In spite of the security concerns many in Barcelona shrugged off fears of attack to pay their respects to victims today.

By midday thousands of people had returned the Ramblas area, gathering in a nearby square, chanting "We are not afraid."

Police were inspecting backpacks and handbags belonging to people trying to access the area as a precaution.