Ireland is one of a handful of nations committed to phasing out oil and gas production at the COP26 summit in what organisers Denmark and Costa Rica hope will inspire a global movement towards ending fossil fuels.

The coalition, which includes a dozen countries, was announced as nations tussle over a range of issues in the final stages of the UN climate talks in Glasgow.

The UN summit aims to implement the Paris Agreement, which has a target of limiting global warming to 1.5 degrees Celsius.

To do that, scientists say the use of oil and gas must be radically slashed.

The Beyond Oil and Gas Alliance (BOGA) counts France and Greenland among its core members, committing to end new oil and gas exploration and extraction and set a Paris-aligned date for ending production.

The US state of California is also among a wider group signed up to measures to restrict fossil fuel supply.

Minister for the Environment, Climate and Communications Eamon Ryan said: "The decision we have made today …sends a powerful message that we are moving irrevocably away from fossil fuels towards a renewable future – both in Ireland and internationally.

"Through the Climate Act 2021, Ireland has closed the door on new exploration activities for oil and gas. There is no longer a legal basis for granting new licences.

"In line with Irish Government policy of keeping fossil fuels in the ground, we are also currently legislating to prohibit exploration for and extraction of coal, lignite and oil shale.

"As a core member of BOGA, Ireland will lead by example and share our experience of legislation so that we can all move towards a fossil free future."

"Now we extend the challenge to others," said Danish Climate, Energy and Utilities Minister Dan Jorgensen.

Denmark, which is among the largest oil and gas producers in Europe, said it will phase out production by 2050 and cancel all future licensing rounds.

"The fossil era must come to an end," said Mr Jorgensen.

"But just as the Stone Age did not end due to lack of stone, the fossil era will not end because there's no more oil left in the ground. It will end because governments decided to do the right thing."

The initiative was welcomed as a first step that would need the buy-in of more oil producing nations to have an impact.

"This is a welcome and vital initiative to accelerate an end to the age of fossil fuels," said Bob Ward, of the Grantham Research Institute on Climate Change and the Environment at the London School of Economics and Political Science.

"Logically, every country that has now set a 2050 net zero target, including the UK and United States, should be joining this alliance."

The UN's Intergovernmental Panel on Climate Change in its special report on 1.5C, offered estimates of how much fossil fuel use needed to decline in order to hit the temperature cap.

Meanwhile, the UN chief Antonio Guterres has said that climate promises from nations at COP26 ring "hollow" while they continue to invest in oil, gas and coal, as the summit struggles to make headway its the goal to halt devastating warming.

With emissions still rising and current promises putting the world on a path to heat far beyond that target, negotiators were wrangling over a range of issues - from slashing greenhouse gases to financial help for countries already facing supercharged storms, floods and droughts.

"The announcements here in Glasgow are encouraging - but they are far from enough," Mr Guterres told the COP26 climate summit, urging negotiators to "pick up the pace".

"We still have a monumental challenge ahead of us," he said, appealing to delegates to show more ambition.

"Quite a lot has been achieved. But we are still some way away from finalising those very critical issues that are still outstanding."

He welcomed a joint China-US pact to accelerate climate action this decade, which experts said should allay fears that tensions visible early in the summit might derail the talks.

The surprise declaration, unveiled by envoys John Kerry and Xie Zhenhua, said the world's two largest emitters "recognise the seriousness and urgency of the climate crisis" and the need to slash methane issues, although it was light on other detailed action.

Yesterday saw the release of draft "decisions", which were the first real indication of where nations are ten days into deeply technical discussions.

The text, which is sure to change during ministerial debates, called for nations to "revisit and strengthen" their new climate plans, known as nationally determined contributions (NDCs) by next year, instead of 2025 as previously agreed.

The issues that remain unresolved at the COP26 include how vulnerable nations are supported financially to green their economies and prepare for future shocks.

Rules over transparency, common reporting of climate action and carbon markets are all also still under discussion.

Also contentious is wording in the draft text to "accelerate the phasing-out of coal and subsidies for fossil fuels", something which large emitters are opposing, according to sources close to the talks.

And nations already hit by climate disasters are demanding "loss and damage" support from rich emitters.

But the main sticking point is ambition: which countries plan to slash their carbon emissions fast enough to avert dangerous heating.

"We need action if commitments are to pass the credibility test," Mr Guterres said, urging negotiators not to settle for a lowest common denominator outcome.

"We know what must be done." 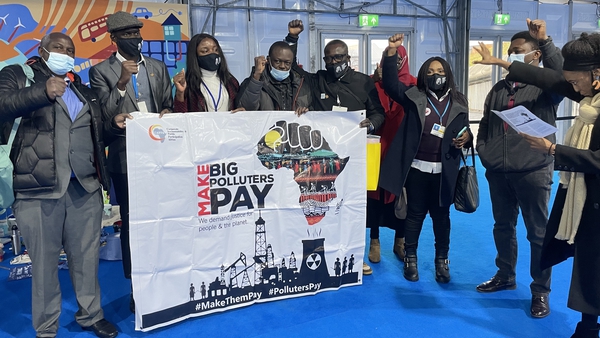 African campaigners say their voices are not being heard at COP26