Ireland is 'tired of being laggards' and there is broad agreement in the Oireachtas that the country needs to move forward, according to Minister for the Environment, Climate and Communications Eamon Ryan.

He said it will take several decades to achieve the target of becoming carbon neutral and the next decade will be particularly dramatic because the Climate Bill sets out ambitions to reduce emissions by 50%.

Speaking on RTÉ's Morning Ireland, Mr Ryan said this will work when we avail of new technology and new ways of doing things.

Minister Ryan said this will be "for the better" and that US President Joe Biden is expected to commit the US economy to the same level of change.

He added that the Bill, introduced in the Dáil yesterday, sets out the framework for how public service and all the agents of the State will work within a plan that will be reviewed every year.

The leader of the Green Party said Ireland has already begun to show leadership in development aid and pointed out its record of investment in climate adaptation and resilience, particularly in developing countries like South Africa.

This thinking, he said, should be applied at home as well. He said the future of agriculture is one that restores nature.

Mr Ryan said he expects the Bill will pass through the Dáil within a number of weeks so the first five-year budget can be set by June/July along with the first climate action plan to implement it.

He said that €250m was set aside in last Octobers budget in order to help people improve their homes to warmer, healthier places where less money is spent on fossil fuels.

Minister Ryan said the initial focus will be on social housing, where the State will make the investment, but a warmer home scheme for those on lower incomes will also be established.

He said changes can only be successful if it is a just transition.

The Minister for the Environment Eamon Ryan says he believes Ireland is starting to show leadership on climate change | Read more: https://t.co/5bPcxYQWu3 pic.twitter.com/wAOJDRJQez

Green Party Senator and party spokesperson on rural development Roisin Garvey said we are "past a debate on climate change" and that "everyone has to step up" because it is both a global and a local issue.

Speaking on RTÉ's Today with Claire Byrne, she said the Climate Bill sets out proper targets for every sector to get us to where we need to be to protect "our land, our people, our air and our food".

She said the Climate Bill does not allow one minister to decide on a national approach, but that each government department will have a carbon allocation and have to decide how to reach the targets and budget for that.

On the same programme, Independent TD Denis Naughten described the new legislation as anti-democratic and anti-Irish,

He said he accepts that new laws in relation to this area are needed, and that Ireland must need carbon neutrality by 2050.

But he said there are a number of elements of this particular legislation that are wrong, adding that he will be putting forward amendments to the Bill.

Mr Naughten said he made a number of detailed submissions to the Oireachtas that were ignored.

We are taking European models to address climate challenges and trying to shoehorn them into an Irish situation, he said, rather than dealing with our own unique challenges.

He said the legislation is drafted in such a way that it incentivises some government departments to "sit on their hands and do nothing and allow agriculture to carry the can".

Senator Garvey said there is "scaremongering" among some rural TDs about the Bill and this has resulted in misinformation about carbon reduction. 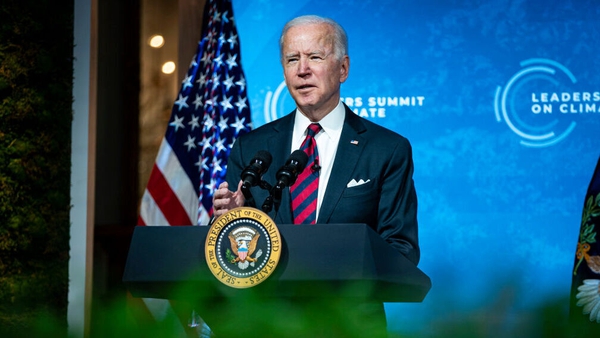