The Environmental Protection Agency has found a 3% decline in the quality of Irish waters - caused mainly by nutrient losses from agriculture as well as waste water discharges from towns and businesses.

However, the EPA said serious river and lake pollution continues to decrease with only two river water bodies seriously polluted.

The latest EPA report is about water quality in rivers, lakes, estuaries, coastal waters, beaches, and ground waters between 2015 and 2017.

It found quality has improved in 197 rivers.

But it has dis-improved a further 269, resulting in a net overall decline in water quality of 3%.

The EPA also found that the long-term loss of high-quality river sites across Ireland is continuing with a further 0.6% decline since 2015.

Most of the pollution is caused by too much nitrogen and phosphorus entering waters with the finger of blame pointed at the agriculture sector, wastewater discharges from towns and businesses, and physical habitat issues.

On the positive side however, the EPA found serious pollution continues to decrease. Only two rivers were seriously polluted down from 91 in the late 1980s. 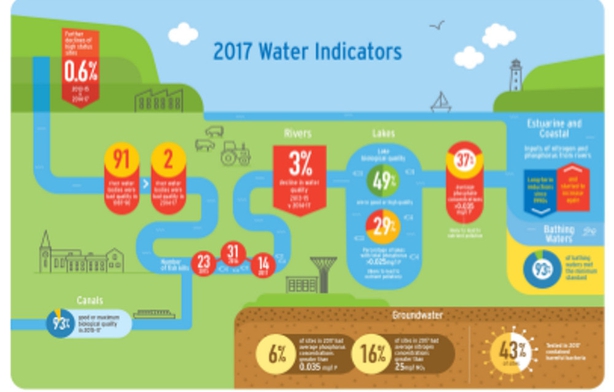