The election of candidates will not proceed in the Tipperary constituency this Saturday due to the death of a candidate.

Independent candidate Marese Skehan was found dead at her home.

It is understood her sudden death is not being treated as suspicious.

The Department of Housing has confirmed that the existing field of candidates will have to be countermanded by the Tipperary returning officer. 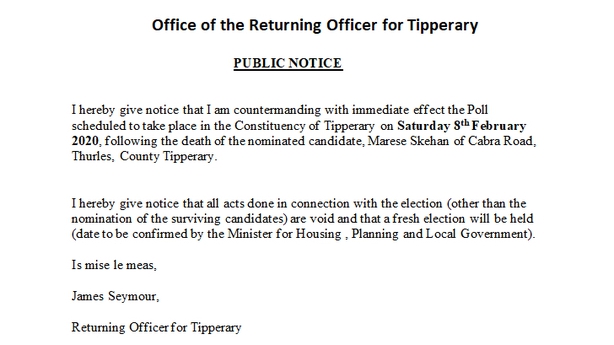 The returning officer will now inform the Minister for Housing.

It means none of the seats in the constituency will be filled this weekend.

This will delay the vote by at least a week or possibly longer.

Speaking on RTÉ's Drivetime, Returning Officer for Tipperary James Seymour said: "I have issued a countermanding notice, which is a notice to all party candidates that all acts in respect of the forthcoming poll on the 8th are now void.

"In effect it means that the poll for the constituency of Tipperary has been postponed until further notice."

Mr Seymour explained that the vote will be postponed out of respect to Ms Skehan's family and also to allow for anyone wishing to take Ms Skehan's place.

"The current candidates that are on the ballot paper for Tipperary - their nominations stand.

"We then open nominations for a very short period in approximately seven days' time to take in any further nominations.

"And then the ballot paper has to be accordingly amended."

Mr Seymour said that he will be issuing another update on the matter in the next 12-24 hours. However, he said it may be a fortnight before the vote takes place in Tipperary.

The election of candidates will not proceed in the constituency of Tipperary this Saturday due to the death of a candidate. @MichealLehane and @davidmurphyRTE report | https://t.co/y7910RNHTO pic.twitter.com/7fFU4FASgP

That will mean that the make up of the 33rd Dáil will not be known next week.

That will have knock-on consequences for the time it will take to form the next government.

Independent Mattie McGrath has said he is seeking legal advice in an attempt to avoid a postponement in the constituency.

If that is not possible he says he would go to the courts to seek to delay the election in all constituencies.

In a statement to RTÉ News, they said they are "deeply saddened" to learn of her passing.

HSE Mid West Community Healthcare said "Marese worked tirelessly in the Home Support Services in north Tipperary," adding that she will be "sadly missed by her large circle of colleagues".

Chief Officer Maria Bridgeman said: "Marese was a dedicated colleague who ensured many people in north Tipperary could receive care in their own homes."