Fine Gael leader Leo Varadkar and Micheál Martin of Fianna Fáil have clashed on several issues in the first leaders' debate of the 2020 General Election campaign.

Health, housing, crime, drugs and the issue of pensions were among the main topics discussed on the Virgin Media Television debate, which was moderated by Pat Kenny.

Both men were also questioned about forming a new government and sharing power with Sinn Féin.

Mr Varadkar said his preference would be to form a coalition, citing possible partners such as Labour or the Green Party, but said that if it comes to it he would be open to supporting a Fianna Fáil government.

"I don't think they are a normal political party," Mr Varadkar said of Sinn Féin.

Mr Martin said he had a problem with how Sinn Féin was governed and said "we will not be going into government with Sinn Féin".

Kicking off the debate, Mr Martin said that Ireland has many strengths but also faces many issues.

"Too many people are struggling and the rising cost of living is hitting everyone. We are being told by the government it is proud of its record," Mr Martin said.

"Our country needs a new government that will put aside the obsession with party politics. I am looking forward to talking about real change."

Mr Varadkar said: "There are more people at work than ever before. Our society is changing and we are making it a more modern place. We have doubled the number of homes.

Asked if he would enter a confidence-and-supply arrangement, Mr Varadkar said it is not his preference but if it will form a government, he will do so.

Mr Martin accused Mr Varadkar of failing to be grown-up.

"There are more personal attacks on me than on Fianna Fáil policies," Mr Martin added. "We believe there is a need for a new government."

Mr Varadkar, however, said that Fianna Fáil was in government for 14 years, which he said ended in unemployment.

"No-one wants to wave off our friends and relatives again from the airport," Mr Varadkar added.

"One of things I respect about him [Mr Martin] becoming leader is that he stood up and apologised for causing the damage to the country.

"Now they are going back to their own spin that it was a global financial crisis."

Asked about the impression that Fine Gael lacks empathy and understanding, Mr Varadkar said that he cares deeply about the country.

He added: "I know people say that about my party and about me but I care deeply about our country and the problems we face. I maybe can't put it into words as good as my opponent does but I do it in action.

"I show the fact I care through the work I do.

"I absolutely acknowledge we haven't done enough so I can do more and reduce income tax." 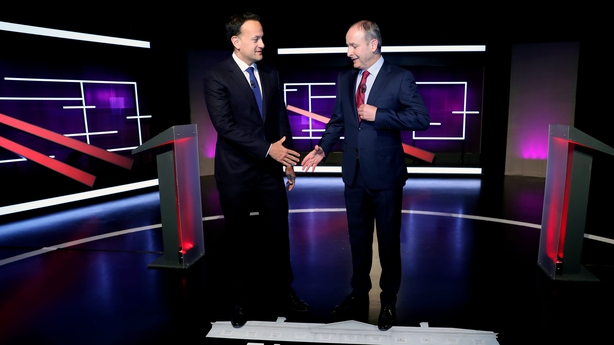 Mr Martin said that Fine Gael has failed on all its own terms.

"They are short on (housing) targets by about 20,000," the Fianna Fáil leader added.

"People can't save for houses because of the excessively high rents."

Mr Martin said that Fine Gael promised five years ago it would end homelessness. "Today they are making the same promises," he added.

Mr Martin hit back saying there was no comparison from his time in the health department and accused Mr Kenny of making a "deeply unfair" statement.

"I made a dramatic impact," he added.

Mr Varadkar said he believes that the health service can be fixed, saying he will work "extra hard" over the next five years to fix it.

"Listening to Micheál Martin you would swear everything in his former health department was great," Mr Varadkar added. "It's unbelievable arrogance."

"I believe health can fixed because we have an action plan that is broadly agreed by all the parties.

"We have a reform plan for the HSE. We have a new deal with nurses to increase their pay and modernise the work they do.

"We are negotiating with consultants to give them a much higher salary."

Mr Martin accused Fine Gael of using plans as an "excuse for inaction".

Mr Varadkar said he wanted to express his deep regret and sorrow for people spending time on a trolley.

"I know what it means for families and the impact it has on patients," he added.

Mr Varadkar stated that Fianna Fáil took 1,400 beds out when they were in power, adding that they are opening two new hospitals.

Mr Varadkar and Mr Martin both said they have private health insurance.

The debate then turned to a number of scandals that have dominated the Dáil recently, including TDs voting on behalf of their colleagues and the controversy surrounding Fine Gael TDs Maria Bailey and Dara Murphy. 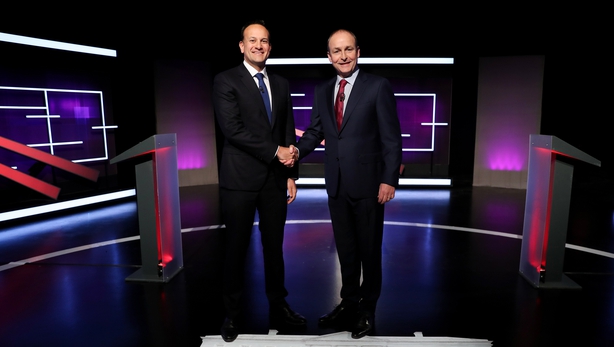 Mr Varadkar said that those who have brought "embarrassment" on his party are no longer standing in the election.

He added: "Dara Murphy is not a candidate in this election. He said he will cooperate with an inquiry."

Mr Martin responded: "You knew for two years he wasn't doing his work and you facilitated that and endorsed that."

Mr Kenny asked the two leaders what they would do to the middle class people who are taking drugs and fuelling the drug gangs.

Mr Martin replied: "They are partly responsible for the murders that are going on. The country is awash with drugs.

"This is a new trend. These gang lords are penetrating the provinces now."

Mr Martin said his party wants to make it an offence to use young children to distribute drugs.

Asked whether they had taken any recreational drugs, Mr Martin said he had not.

Mr Varadkar said he had previously answered that question "truthfully".

When probed on what the answer was, Mr Varadkar said: "Yes, but it was obviously a long time ago."

Before becoming Taoiseach, he had admitted to smoking cannabis.

The party leaders were asked about their refusal to go into power with Sinn Féin.

"I don't think they are a normal political party," he added.

"They have a strange decision-making process where key decisions are not make by elected people but by Sinn Féin activists and that troubles me."

Mr Martin said he has a fundamental problem with how the party is governed.

"Sinn Féin continue to try and impose a narrative about the murderous campaign by the IRA. We will not be going into government with Sinn Féin."

Mr Varadkar said he believes a united Ireland will happen in his lifetime. But he said he is against a border poll in the next five years because he believes it will be defeated.

Mr Martin said a united Ireland is possible in his lifetime. He added: "We have to evolve. I prefer if people work fully in the Good Friday Agreement." 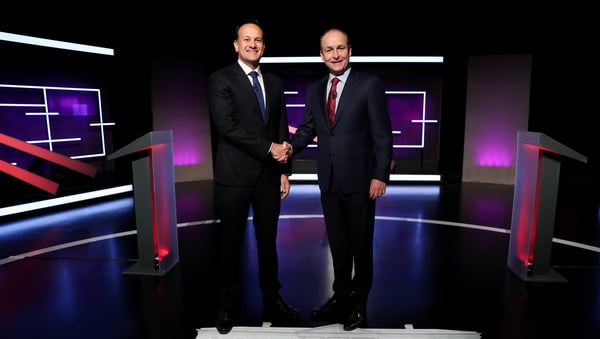 As it happened: Varadkar and Martin face off in TV debate Election 2020