Fine Gael TDs have emphasised the importance of a "stable and responsible" government and cautioned against a second general election.

Deputy Regina Doherty told RTÉ News that "the arithmetic probably would not be much different if we did have another election and then we would find ourselves back here in a number of months time".

Dublin Bay South TD Eoin Murphy said: "I think it is very important as the largest party in the 32nd Dáil that Fine Gael and Enda Kenny do what they can to try and establish a stable, responsible government and one that will last.

"What's important for the future of this country given the various crises we are facing and the opportunities and challenges is that we have a stable government that can work with a newly reformed Oireachtas to get things done for the people."

Earlier, Fianna Fáil’s director of elections Billy Kelleher said his party is committed to providing an alternative to Fine Gael and to establishing a minority government led by Fianna Fáil.

Speaking on RTÉ's Morning Ireland, Mr Kelleher said pressure should not be put on Fianna Fáil to do a U-turn on its election commitments.

He said the party would be intensifying discussions to ensure there is a government in the next few weeks.

He said a minority FF-led government could work with the support and abstention of some parties on various issues.

"At the end of the day it will be the parliament that will decide whether or not there is a majority, and if there's not, well then obviously a general election is something that could happen," Mr Kelleher said.

"But in the meantime, Fianna Fáil wants to play its role and I think other parties who seem to believe that their god-given right is to march into opposition, put Fianna Fáil/Fine Gael in government and play no meaningful role, themselves or individuals, other than be up there voicing noise on a continual basis.

He added: "Minority governments could work in the event of others abstaining on important issues.

"The obligation here seems to be for Fianna Fáil, to first of all be forced to tear up the mandate it got.

Mr Kelleher said his party has ruled out working with Independent TD Michael Lowry, but is open to talking to the Labour Party and all other parties and Independents.

He said Labour had a "very significant role to play" in setting up the next government.

He said Fianna Fáil would talk to like-minded parties who are "willing to participate and take their responsibilities seriously".

Meanwhile, Fianna Fáil’s Timmy Dooley said it is either Micheál Martin or Enda Kenny for Taoiseach, or there will be another election.

Speaking on RTÉ's Today with Sean O'Rourke, Clare TD Mr Dooley said if Fianna Fáil "don't step up to the plate" it will hurt the party’s hopes in the next general election.

"If we don't step up to the plate now and deal with this reform as is required, by excluding the smaller parties and Independents out of all decision making within the Dáil, it will be provided for us after the next election," he said.

"[This is] because the bigger parties will see their demise further if they don't accept that somehow a couple of parties should get together act in effectively a bloc, take all the spoils and exclude others."

Fianna Fáil leader Micheál Martin failed in his bid to be nominated Taoiseach during the first sitting of the 32nd Dáil yesterday, which adjourned late last night until 22 March.

Mr Martin received 43 votes in favour and 108 against.

In nominating Mr Martin, new Fianna Fáil TD Lisa Chambers said the party is making it clear it is opting for a change in government because that is what the electorate voted for. 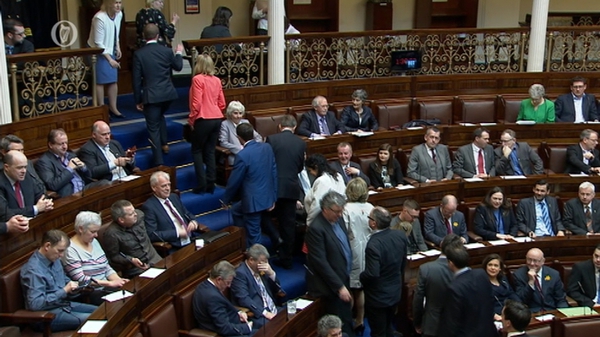 As it happened: First day of 32nd Dáil