The newly-elected Dáil meets without us being any clearer about the shape of any future government as some seem to be keener on being in opposition than in office.

Voters pick candidates rather than governments, but with our highly sophisticated voting system they could if they wished convey rather more information that is relevant to coalition formation than they might under most other electoral systems.

In addition, polling information from immediately after the election is interesting in telling us what voters thought before they knew the result.

The RTÉ Exit Poll [conducted by Behaviour and Attitudes for RTÉ in partnership with the School of Politics and International Relations of UCD, The Department of Government in UCC, The School of Politics, International Studies and Philosophy in Queen's University Belfast, and Trinity College Dublin] asked voters directly what sort of government they would prefer to see.

The choice was a structured one, with voters being presented with a list of options: 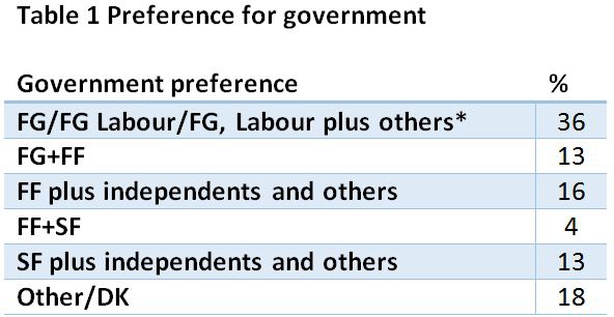 *This combines three options: a Fine Gael government, Fine Gael and Labour, and Fine Gael, Labour and others or independents.

The choices were perhaps even less clear than they are now, and some of these look to be far from feasible, but looking at the options chosen gives us some idea of preferences.

Most popular here is some kind of Fine Gael government: this includes Fine Gael by itself, Fine Gael plus Labour, and Fine Gael with Labour and others.

Next most popular (Other/Don't Knows is a diverse grouping) is a Fianna Fáil-led government, followed by a Fine Gael/Fianna Fáil coalition and by a Sinn Féin-led government. 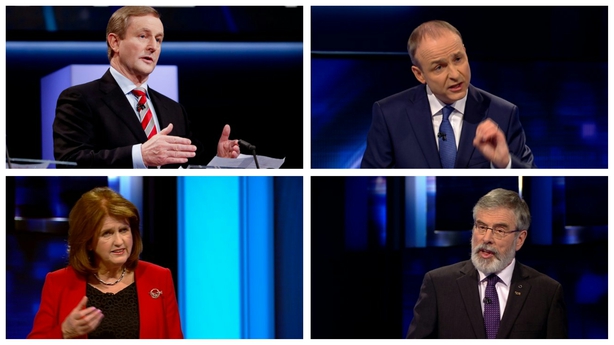 Looking at the options favoured by the voters for each party throws up few surprises, but there are some unexpected patterns.

Less expected might be that a Fianna Fáil-led government (with others and Independents) was not the choice of a majority of Fianna Fáil voters, although they did prefer this in larger numbers to any alternative.

A quarter opted for a Fine Gael/Fianna Fáil coalition.

Possible this was realism, but it might also indicate a preference for a centrist rather than a left leaning Fianna Fáil administration.

Independents seem critical to any government that is not the results of some kind of deal between Fine Gael and Fianna Fáil.

Of the other parties Social Democrat and Green voters favoured a Fine Gael-led government and AAA/PBP voters opted marginally for a Sinn Féin-led one over something else that was unspecified.

None of the options came close to getting majority support. 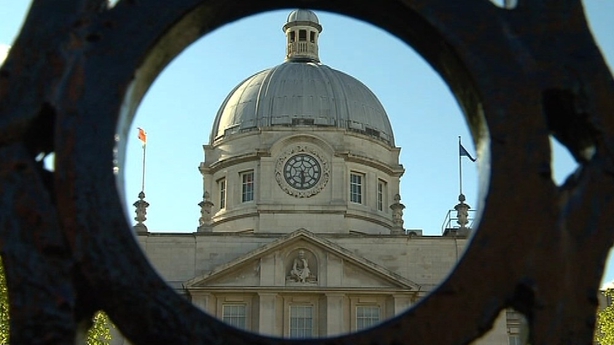 Respondents were not asked for their second choice, but we do know from the same exit poll how they cast their votes, and we can examine those in more detail to see if we can get some idea of which party might command the widest support.

We can also see what combinations of parties each voter ranked highly as respondents were asked to complete a "mock" ballot paper like the one they had just competed in their polling station.

The counts told us about first preferences, but what of later preferences?

First preference votes were shared between Fine Gael and Fianna Fáil with 26% and 24% respectively.

Most people (84%) seem to have voted for a least two parties with 77% also indicating a third (party) preference, taking broad support for Fine Gael and Fianna Fáil up to 46% and 43% respectively.

Only one third expressed a fourth (party) preference, but counting in those pushes support for Fine Gael up to 49% and for Fianna Fáil to 46%.

We would have to include fifth, sixth and seventh preferences to get Fine Gael support up to 50%, and by that time people would have gone so far down the ballot paper they may have been indicating their least favoured party in some constituencies.

Essentially what this tells us is that on the whole Fine Gael was favoured over Fianna Fáil, but not by very much.

Also that close to half of all voters gave Fianna Fáil and Fine Gael a high preference.

In fact, two-thirds of all voters gave one or other of these two parties a first or second preference.

Support for Fine Gael and Fianna Fáil and for the other major groups is summarised in the table below.

This demonstrates that support for Labour is wider than its 7% first preference vote might indicate, but also the very widespread attraction of independents who attracted a high preference from more than 40% of all voters.

Of course this small difference between Fine Gael and Fianna Fáil was also the message of the first preference vote, with wider support conveyed by the transfers that were counted, but the level of support for some parties is more impressive than we might have suspected.

The difference here is that we are effectively counting all transfers, not just those from elected or eliminated voters.

Some electoral systems would always do that.

The best known example is the voting in the Eurovision Song Contest.

Using that sort of scoring method on the exit poll data would also indicate that Fine Gael was a narrow winner over over Fianna Fáil!

This could be said quite rightly to be rather an "academic" exercise, but it does provide a correction to suggestions that the electorate decisively rejected the incumbent government, and Fine Gael.

Of course it did, but a Fine Gael-led government would arguably still be able to claim more electoral support than one led by Fianna Fáil.

Any government will need the support of more than one party, which may or may not mean a coalition. 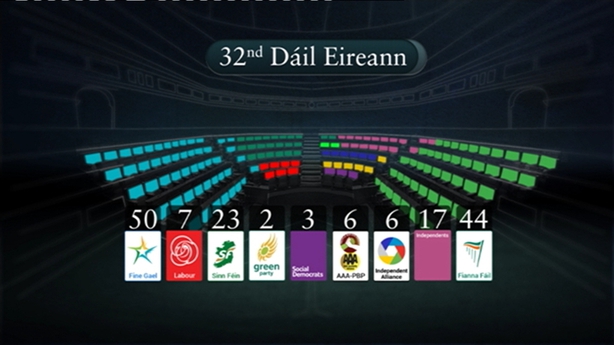 Minority governments can in principle form different alliances according to the issue being decided, but some parties may be more reliable supporters than others.

The combination of voters' first and second preferences could be said to indicate which parties the voters would like to work together.

However, there is remarkably little agreement among voters.

Just one half of all Labour voters went on to vote next for Fine Gael, and only a third of Fine Gael voters returned the favour, even though half of them supported a Fine Gael/Labour government.

The fact that people do not seem to structure their vote in a way that conforms very closely to their preference for a government is not unique to post-crisis Ireland.

It has been typical of Irish elections in the past.

One reason for this is probably that voters are attracted by candidates independently of parties, and the needs of the constituency, and a voter's area within that constituency may cut across and outweigh considerations about government formation.

This means less guidance for those engaged in forming a government, or avoiding being in government, but it also leaves them more free to do what they want to do, however they justify it. 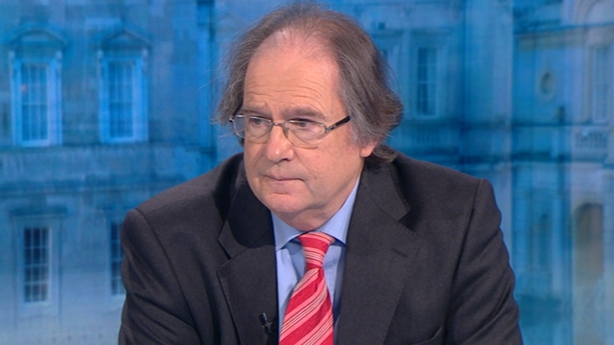