The father of dentist Savita Halappanavar, who died of sepsis in Galway in 2012 after being denied an abortion during a protracted miscarriage, has expressed delight as the Yes side heads for victory.

Andanappa Yalagi told local media in India that he was "very happy today".

He added: "We've got justice for Savita. What happened to her will not happen to any other family.

"I have no words to express my gratitude to the people of Ireland at this historic moment." 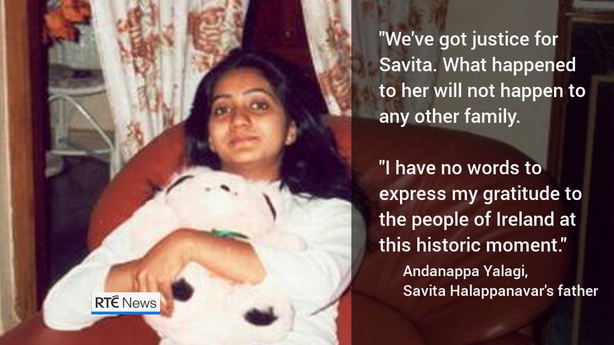 Mr Yalagi called for the new abortion legislation to be called Savita's Law.

Shampa Lahiri was speaking to Samantha Libreri  at the RDS and says she voted Yes for Savita Halappanavar #8thref pic.twitter.com/6yEkz40xos

Flowers and messages were left at a mural of Mrs Halappanavar in Dublin today.

The mural created by the artist Aches, outside the Bernard Shaw pub in Portobello, went up on Thursday and became a focal point for Yes campaigners.

Some people were in tears as they left flowers by the mural and taped messages to the wall.

Health Minister Simon Harris said the Mrs Halappanavar was in the front of his mind when he voted, but he was not sure the new abortion law should be called Savita's Law.

Mr Harris said: "I'm not sure whether the bill should be called that, but it certainly will be Savita's law in many ways because Savita has had such a profound impact on the thinking of so many people in this country including myself."

Speaking on RTÉ Radio One, Mr Harris there were many others who suffered because of the Eighth Amendment that new legislation could also be named after.

The story of Savita and the image of Savita was certainly in my mind when I voted on this and will continue to be," Mr Harris said.

"I hope we can do her family proud that they will know that lessons have been learned and our country has responded."