Facebook is to begin rejecting ads from foreign groups seeking to influence the referendum on the Eighth Amendment.

From now until polling day on 25 May, the social network will be asking those posting ads about the referendum to prove residency in Ireland before it will accept the ad.

The move follows the raising of concerns about how organisations and individuals abroad may be using social media to try to impact the outcome of the vote.

Facebook had previously announced it would be introducing a similar transparency tool globally in order to safeguard the integrity of the democratic process where elections and referendums are taking place.

But those tools were not going to be ready in time for the referendum here as the company is building a system to manage the process.

So in the interim, Facebook has built a workaround to enable a similar type system to be in place for the remainder of the campaign.

In a statement, it said that as part of its "efforts to help protect the integrity of elections and referendums from undue influence, we will begin rejecting ads related to the referendum if they are being run by advertisers based outside of Ireland."

"Our company approach is to build tools to increase transparency around political advertising so that people know who is paying for the ads they are seeing, and to ensure any organisation running a political ad is located in that country."

Electoral laws here prevent campaign for accepting foreign donations, but those laws do not explicitly govern the online and social media space.

Campaign and advocacy groups will still be able to use the services of foreign ad agencies and other service providers.

The system here will see a mechanism put in place for Irish based groups to flag up what they think are foreign funded ads on the platform.

Machine learning technology will also be used to identify such ads.

The social network says it has been working with the main referendum campaign groups to explain what content is and is not acceptable on its site and to give them a reporting channel to flag up questionable content.

A number of weeks ago, Facebook announced it was introducing View Ads feature which enables users to see what other ads an advertiser has posted by clicking on it.

It has also run an ad campaign here educating users about how to spot fake news.

Despite the efforts, Facebook has also been criticised by politicians here for failing last week to take down a link to a YouTube channel that falsely purported to contain RTÉ News content about the referendum but which was in fact fake.

Speaking on RTÉ's News At One, Press Ombudsman Peter Feeney said that he welcomed Facebook’s announcement.

He said it was an acknowledgement that Facebook has a responsibility in this referendum.

He said that unlike broadcasters and newspapers, social media is answerable to nobody.

Mr Feeney said it is not enough to say advertisements regarding the referendum will balance out as social media is open to manipulation and it can prove to be a very murky space.

He said social media has hidden behind the fig leaf of "hosting" content rather than "posting" content; but they sell advertising and they should be regulated. 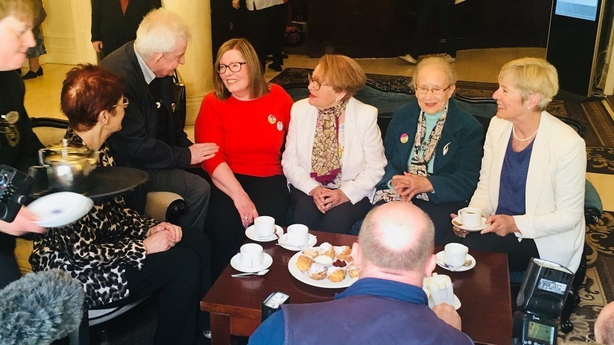 Meanwhile, Grandparents for Repeal, which has given its support to the Together for Yes campaign, has called on other grandparents to vote yes in the referendum on the Eighth Amendment on 25 May.

Former Fine Gael minister Gemma Hussey described the insertion of the Eighth Amendment into the Constitution in 1983 was a "catastrophic mistake".

The retired judge Ms Justice Catherine McGuinness said there is abortion in Ireland, but currently it is an Irish solution to an Irish problem.

Carol Hunter, who organised today’s event, said when people are young, things are black and white.

However, she said In the process of getting older, there is a realisation that "it’s all grey" and she said people "don’t know the answers to anything very much".

Ms Justice McGuinness said there is a huge problem with social media in the referendum campaign.

Speaking at the launch, she said there needs to be regulation regarding "the way things are written online".

She described as "ridiculous nonsense", the argument that Facebook not a publisher but a platform, and therefore avoids the law on libel that binds newspapers.

The Love Both spokesperson Cora Sherlock, who is a campaigning for a No vote in the Eighth Amendment Referendum, said the social media campaign by the group is run from Ireland and Facebook's decision is not going to be a difficulty.

"It's very important to us, because it's difficult to get the message out", she said.

"The Government doesn't want to discuss this proposal, we have challenged the Minister for Health to a debate and he hasn't so far kept up to his commitment to debate this issue with us".

She said social media becomes less important when debates happen, so for the moment, it remains very important.