Hundreds of people across Dublin have been given cameras to record traffic going past their home.

It is part of an EU Citizen Scientist initiative called WeCount, which is being run in five European cities; Madrid, Barcelona, Ljubljana, Leuven and Dublin.

In Ireland, it is being coordinated by Francesco Pilla, Associate Professor at UCD's School of Architecture, Planning and Environmental Policy.

He says the idea is to empower citizens by giving them hard data about what is going on outside their homes, because people often have strong opinions about transport or mobility issues in their area but do not have the evidence to drive the change they want to see.

The cameras are stuck to the inside of a window with a clear view of the road and record cars, heavy vehicles, bicycles and pedestrians passing by. 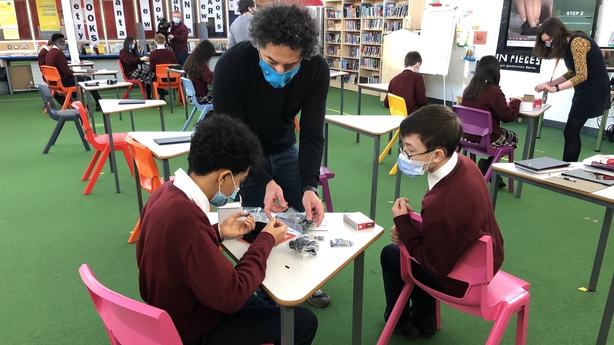 A small computer in the sensor converts that into numbers and uploads the data. The video never leaves the device so the process is GDPR compliant.

The citizens own the data, and can use it to lobby their local authority.

Mr Pilla is also distributing air quality monitors but has fewer of those, and hopes to get one to each community where people are participating so the effect of traffic on air quality can also be recorded.

He says the information gathered will be used to inform policy at a European level but also to allow bottom-up driven changes in participants' local area.

He is giving out some through schools where he gives workshops to the students.

People across Dublin are being given cameras to monitor the traffic going past their homes. It's part of the WeCount project which is aimed at giving people data they can use to campaign for quieter streets or better air quality in their area. pic.twitter.com/Vqa58qnnEz

At Trinity Comprehensive in Ballymun, students were interested by the project. Abulaziz Abdulnasser says hundreds of cars pass his house every day, and he would like to know how many.

Community activists are also signing up. In Phibsborough, traffic is a big issue and several local businesses around the busy crossroads have agreed to put cameras inside their windows.

Anne Bedos of Rothar Bikeshop says planners have always treated Phibsborough as a place to travel through rather than as place for people to be, but despite this it has a thriving community.  Marion Fitzpatrick of Phizzfest says the traffic levels can be difficult and at times dangerous for people in Phibsborough as they try to get around their own village.

Across the city in Harold's Cross, Paula Russell is a member of the village community council. She has taken a sensor to measure the traffic on the busy road outside her house. She says the village council wants to make the area smarter, healthier and greener and the sensor will give them data which will help as they work towards that goal.

No spaces left in State accommodation for new refugees

Garda pursuit of Kinahan gang will be 'relentless'