An archaeological excavation has changed our picture of Dublin's earliest Viking settlement with the black pool or Dubh Linn now known to be a lot bigger than first thought.

The dig beside Dublin Castle has also uncovered the city's oldest police cells and a punishment burial.

The excavation is taking place on Ship St near where the remains of one of the Dublin's oldest churches - St Michael le Pole that was founded in the 6th century - are known to be.

Archaeologist Alan Hayden from University College Dublin said the work has uncovered the cells from a police station on Chancery Lane built in 1830, and beside it are walls from a medieval farm.

There are 12th Century quarries which provided the stone to build Dublin Castle and its walls. 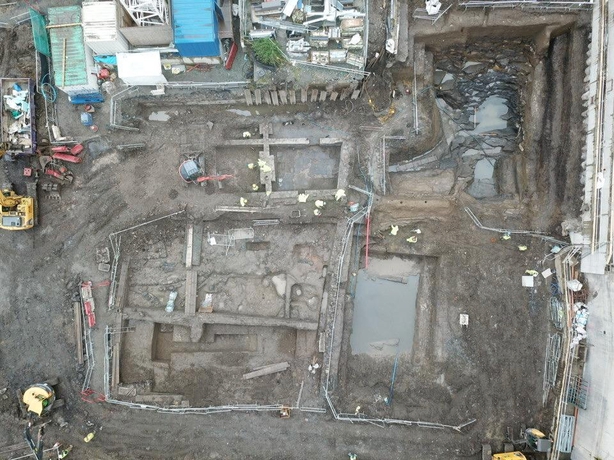 The most important discovery yet is that Dubh Linn - the pool on the River Poddle where the Vikings first settled - was much bigger than originally thought.

At present a garden inside Dublin Castle marks what was thought to make up most of the original Dubh Linn.

However, this excavation has established it was nearly 400 metres wider extending to the present dig site and where St Michael le Pole church stood.

Mr Hayden says this solves two questions that has puzzled historians - why St Michael's Church referred to 'le pole' or the pool and how reports that the Vikings had up to 200 ships on the Dubh Linn.

Niamh Donlon of the One Le Pole Square project says a development planned for the site will consist of a two-storey convention centre below six floors of office space.

It will incorporate the history of the site in its name.

Tom Wilson, senior civil enginer with builders JJ Rhattigan, said the archaeological dig was already factored into the development and has not caused delays.

Meanwhile, Mr Hayden says there was one unusual find - a burial of a man found outside the church cemetery with his hand and feet cut off. He said this was a medieval punishment for insulting a lord or king.