Plans to introduce a €9 an hour parking charges for coaches in Dublin city centre are to be halted following opposition from the tourism and hospitality industries.

However, proposed parking charge increases for private motorists of up to 10% are due to go ahead.

The city council had proposed introducing the charge at existing coach parking bays to encourage the use of a depot facility, which opened last year on North Wall Quay.

Although passed by councillors, the proposal received 95 objections during public consultation from coach drivers and groups representing restaurants, hotels and the retail industry.

Among the issues raised were the cost implications on businesses, problems with the coach parking depot, the lack of set down facilities provided by new hotels and unfair advantage for Dublin Bus and Bus Éireann who get free parking.

As a result, the council's enforcement officer, Dermot Stevenson, said the city council "will, at this stage, temporarily pause the introduction of this proposal".

He stated in a report that the council will conduct a survey during this tourist season to gauge the level of parking compliance by coach operators and that the introduction of the fee may be reconsidered.

It was noted in the report that the city development plan aims to eliminate "unsuitable" parking by coaches as well as buses, taxis and lorries.

The council does intend to go ahead with plans to increase parking charges for motorists and to extend the pay and display areas. 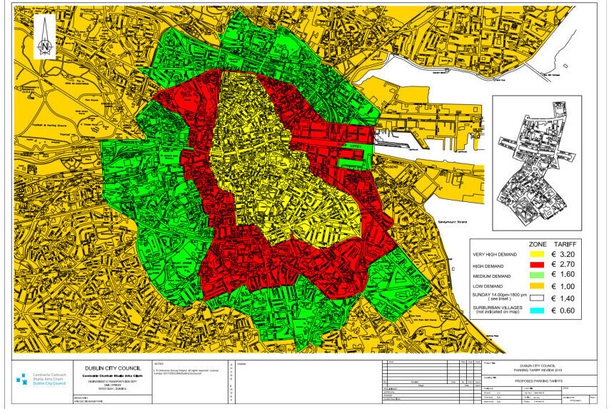 The Yellow Zone will also be extended in the North City as far as the section of the North Circular Road at Mountjoy Prison and streets around the Mater Hospital, Blessington St and Mountjoy Square.

The Red Zone would be extended to include Ranelagh, Rathmines and the Quays at the 3 Arena and all of Sir John Rogerson's Quay.

The medium demand Green Zone's charge is staying at €1.60 but the zone will be extended to include Kilmainham, the South Circular Road and Dolphin's Barn.

The report notes there have not been any increases since 2008.

The charges will be discussed by the council's transport committee next week.

In a separate development, Dublin's 30km/h speed limit on residential streets is to be extended again as part of proposals from city council officials.

This would be the fourth extension of the speed limit area following the success of previous phases.

If passed by councillors the plan will go out for public consultation.

Meanwhile, the city council is to extend the trial pedestrianisation of Suffolk St which connects with Grafton St, with a view to making it permanent.

Virus testing centre in Dublin closed due to reduced demand

'We should be in a hotel telling stories': Man describes father's quarantined funeral