Operations at Dublin Airport were suspended for 30 minutes after a pilot reported a drone flying above the airfield.

Planes were grounded and incoming flights diverted after the incident at around 11.30am this morning.

The DAA said a 30-minute suspension was ordered in line with official protocols for drone sightings.

No more drone activity was reported in the period and operations resumed. 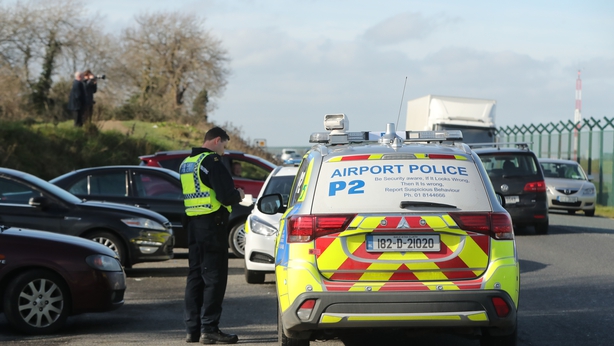 After the incident, airport police and gardaí, including members of the armed response unit, were seen conducting inquiries close to the perimeter of the airfield.

Officers spoke to a number of people and searched vehicles in an area popular with plane spotters on Old Airport Road.

Gardaí have confirmed they are investigating the sighting of a drone flying illegally in airspace at Dublin airport.

Three incoming flights were diverted due to the scare, two to Belfast and one to Shannon.

Speaking on RTÉ's News at One, Siobhan O'Donnell said "what the pilot saw is an absolute definite sighting of a drone".

Ms O'Donnell said the drone had not been recovered and she expressed concern it could return.

She added: "It's a very serious situation to spot a drone in the airfield so the decision to suspend flights was not taken lightly.

"Drones can do huge damage to an aircraft. The drone was out in the airfield area where flights are landing and taking off."

Flight operations have now resumed @DublinAirport following an earlier drone sighting. We apologise for any inconvenience. The safety and security of passengers is always our key priority.

Many flights are holding due the confirmed sighting of a drone over Dublin Airport.

A spokesperson for DAA said: "It is illegal to fly drones within five kilometres of an airport in the State and all drones that weigh more than 1kg must be registered with the DAA.

"The safety and security of airport users is DAA's key priority at all times and staff at Dublin Airport and other agencies continue to remain vigilant in relation to drone activity in the vicinity of the airport."

Dublin Airport apologised for the inconvenience to passengers, tweeting: "The safety and security of passengers is always our key priority."

Read more:
Battle for the skies: how to protect airports from drones

Aircraft were grounded over three days, with 1,000 flights cancelled and 140,000 passengers affected.

In January, Minister for Transport Shane Ross convened a meeting of experts to discuss the threat posed by drones.

At the time, he said the prospect of an attack was "low" but authorities needed to be vigilant. Today, Mr Ross said passenger safety was first priority at Dublin Airport and the threat and risk group will look again at the issue next week.

Speaking in the Dáil, Tánaiste Simon Coveney said Ireland was not immune from the challenges faced by drones near airports.

He said they were "very difficult to deal with from a technical perspective".

Mr Coveney said: "There are some very sophisticated areas in very advanced countries which have had difficulties dealing with this issue recently.

"This is an issue that has been raised by the Minister for Transport. He has given a commitment to look into the issue, and to ensure that an appropriate response is put in place.

"I don’t think we should pretend that Ireland should be immune from challenges that are very difficult to deal with from a technical perspective, but I think we should learn from the lessons of our nearest neighbour and put mechanisms in place that are as effective as possible."

He was responding to a question from the Fianna Fáil TD Dara Calleary, who said the Dáil had been assured by the Government that such suspensions would not happen here.