The first delivery of waste to Dublin's Poolbeg incinerator took place this morning.

The plant will start burning waste by the weekend and by the end of May it will start supplying enough electricity for 80,000 homes.

A district heating system for 50,000 homes is awaiting infrastructure but is expected to be part of the Poolbeg West development. 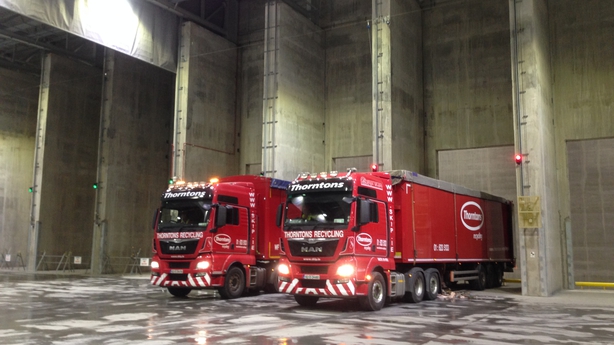 Today's delivery means the plant will be operational ahead of schedule after years of controversy.

Many residents in Ringsend and Sandymount remain opposed to the development, and concerns have been raised about residual waste.

Green Party leader Eamon Ryan has said his party is concerned that recycling efforts will be undermined as the Poolbeg Incinerator opens for business.

Speaking on RTÉ's Drivetime, Mr Ryan said: "This has to be fed - it's 600,000 tonnes, it's not a small amount. And it will provide an incentive for the waste companies, for the local authorities to take the foot off the pedal when it comes to promoting recycling.

"They will want plastics and other materials to burn, so I think there is a real risk that it will provide a disincentive for recycling in this city and in this country."

John Daly, managing director of Covanta, Dublin City Council's private partner in the project, says fly and bottom ash will be stored securely and shipped abroad according to environmental regulations.

He says the facility is urgently needed as waste companies are finding it more difficult to export to incinerators abroad.

Even with increased waste volumes, exports of waste from Ireland have dropped from 560,000 tonnes to 430,000 last year.

Mr Daly said this had led to emergency powers being used to increase capacity at landfills.

The plant will process 600,000 tonnes of waste a year from the eastern half of the country

It will be operational for 45 years.

The first trucks have just unloaded at the new Poolbeg incinerator #rtenews pic.twitter.com/DOHOZlipBm

Speaking on RTÉ’s Morning Ireland, Mr Daly said it was anticipated that the plant will be operating at full capacity by September.

Mr Daly said that, at full capacity, 120 trucks a day will come to the plant; nine trucks an hour over a 14-hour day, which he said would represent about 1% of the total traffic coming across the Thomas Clarke Bridge, more commonly known as the East-Link.

Asked about safety concerns over dioxins, Mr Daly said he did not anticipate that there would be any problems staying within European norms.

Should anything go wrong with the emissions, the Environmental Protection Agency would be immediately informed.

Once the EPA was informed, he said, the public would know.